SEOUL, Aug. 27 (Yonhap) -- South Korea's Prime Minister Chung Sye-kyun said Thursday that it is time to make a decision on raising social distancing guidelines to the highest level to help control the spread of the coronavirus.

"The government has made efforts to slow down the pace of the pandemic, but we haven't had much improvement," the prime minister said in a meeting with experts on infectious diseases. "Some call for raising the level, while others want a wait-and-see stance, citing insufficient preparation and the economic impact." 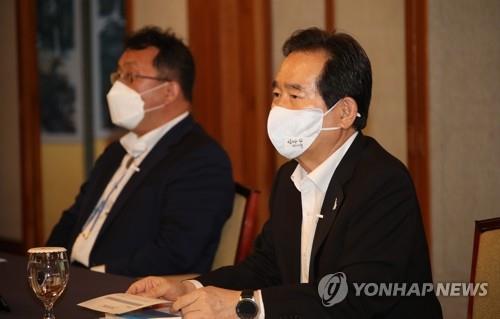 South Korea has reported around 300 new virus cases everyday for weeks due to sporadic cluster infections, with a nearly six-month high of 441 new infections reported Thursday.

The Seoul government hiked the virus curbs to Level 2 in the three-tier system earlier this month, banning indoor meetings of 50 or more people, but the country's daily rise in local virus infections has been escalating.

The prime minister said if South Korea fails in fighting the virus, it would again experience the kind of massive outbreaks that occurred in Daegu in February.

During the meeting, some participating health experts called for preemptive action against the virus before a huge wave of cases hits the country again.

"If we don't strengthen the distancing guidelines now, we might see 600-800 COVID-19 cases daily in September," said Lee Jae-gap, a doctor at Hallym University Hospital. "It is time to consider raising the anti-virus level to three."

But other doctors warned of the negative economic impact of the strictest distancing measures.