In a webinar hosted by the Center for Strategic and International Studies (CSIS), former U.S. intelligence official Markus Garlauskas said a summit would require too much of a change from either side.

"Certainly I think at this point, the idea of some sort of a meaningful summit prior to the U.S. election is off the table," said the former intelligencer officer for North Korea at the Office of the Director of National Intelligence.

"I think there would have to be too much of a shift by one side or the other that really wouldn't really comport with what we have been seeing in the last few months," added Garlauskas, who is now serving as a senior fellow at U.S. think tank Atlantic Council. 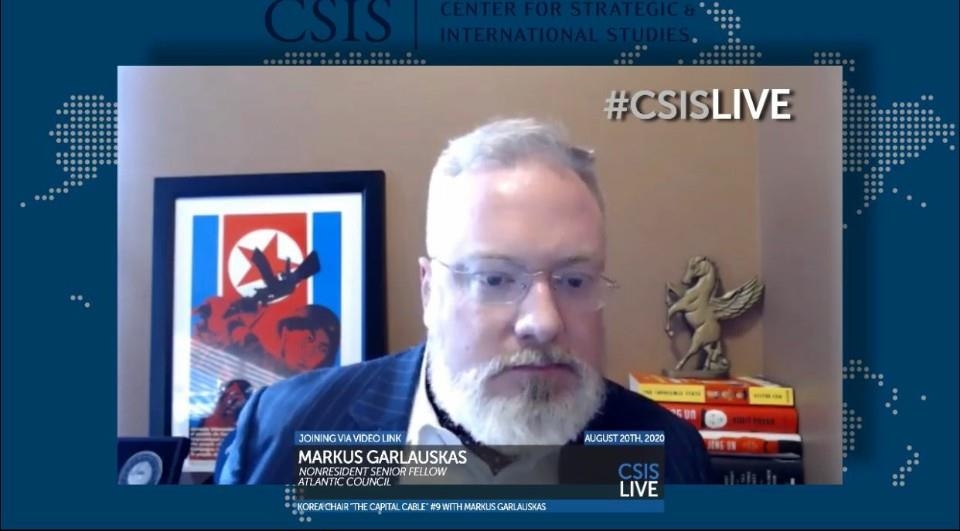 His remarks come amid a long hiatus in denuclearization dialogue between Washington and Pyongyang that followed two bilateral summits between U.S. President Donald Trump and North Korean leader Kim Jong-un, in June 2018 and February 2019.

The two leaders met again in June 2019 during Trump's visit to South Korea and a brief trip to the inter-Korean border that divides the two Koreas, but their talks have stalled since their latest summit ended without a deal.

"I just don't see a realistic scenario, other than like a truly, you know, out of the blue kind of Black Swan event that would drive us to a summit," said Garlauskas.

Many observers and U.S. election followers have speculated that Trump may seek to use what he has called his "good relationship" with North Korea's Kim to stage an "October surprise" before the U.S. presidential election.

Garlauskas noted a surprise may still be in store, but in a different sense.

"We have to remember that at the beginning of this year, the North Korean party newspaper said that Kim announced there was going to be a new strategic weapon unveiled, and that he was no longer bound by his pledges to refrain from ICBM and nuclear testing," he told the virtual seminar, also attended by Victor Cha, Korea Chair at CSIS and a former U.S. negotiator in the six-nation talks aimed at denuclearizing North Korea.

North Korea has kept away from any serious weapons tests amid its leader's unprecedented dialogue with a U.S. president, but is recently seen growing frustrated by their stalled talks.

The communist state blew up a South Korea-built liaison office in its border town of Kaesong in June in what many experts have partly viewed as an attempt to pressure Seoul to mediate resumption of its dialogue with Washington.

"And just because we haven't seen either of those phenomena come to pass, either an ICBM or nuclear test or a new strategic weapon being unveiled, doesn't mean that it isn't really a serious plan of Kim Jong-un," said Garlauskas.

Cha agreed the North will likely resume its provocations, in a move to shape the North Korea policy of a new U.S. administration on their terms.

"Invariably, a new administration comes in and they will announce we're doing a policy review on North Korea, and then North Korea will pop off something, and that will, you know, inevitably shape the policy review. So I think they will, by their own behavior, shape the policy that comes out of a new administration. And usually, probably in a more harder-line direction because of what they do," said Cha, who has also served the director for Asian Affairs at the White House National Security Council.

He, on the other hand, insisted a third U.S.-North Korea summit before the U.S. election may still be possible.

"I still think anything is possible, frankly, with the two leaders that we have currently involved in this," he said.