Kim's trip to South Hwanghae Province, which came after Typhoon Bavi passed along the North's western coastline Thursday, is seen as aimed at highlighting his image as a leader caring for the lives of his people as they have been reeling from recent back-to-back natural disasters.

During the visit, Kim said that the scale of damage is smaller than expected and "positively appraised national crisis control system against natural disasters taking up proper shape and the ability to counter the crisis making remarkable improvement," the Korean Central News Agency said.

He stressed the need to "direct efforts to minimizing the damage in the agricultural field in particular and reduction in the harvest," while urging "an all-out campaign" of completing the recovery so that the country can mark the 75th founding anniversary of the ruling Workers' Party next month "with proud of achievement."

Hwanghae Province is one of the largest rice-producing areas of the country.

"It is one of top-priority tasks to be surely carried out by our party to go among the people and encourage and sincerely help them when they are in trouble and feel difficult and the Central Committee of the party should always be with them both when they are in weal and woe," Kim said, according to the KCNA. 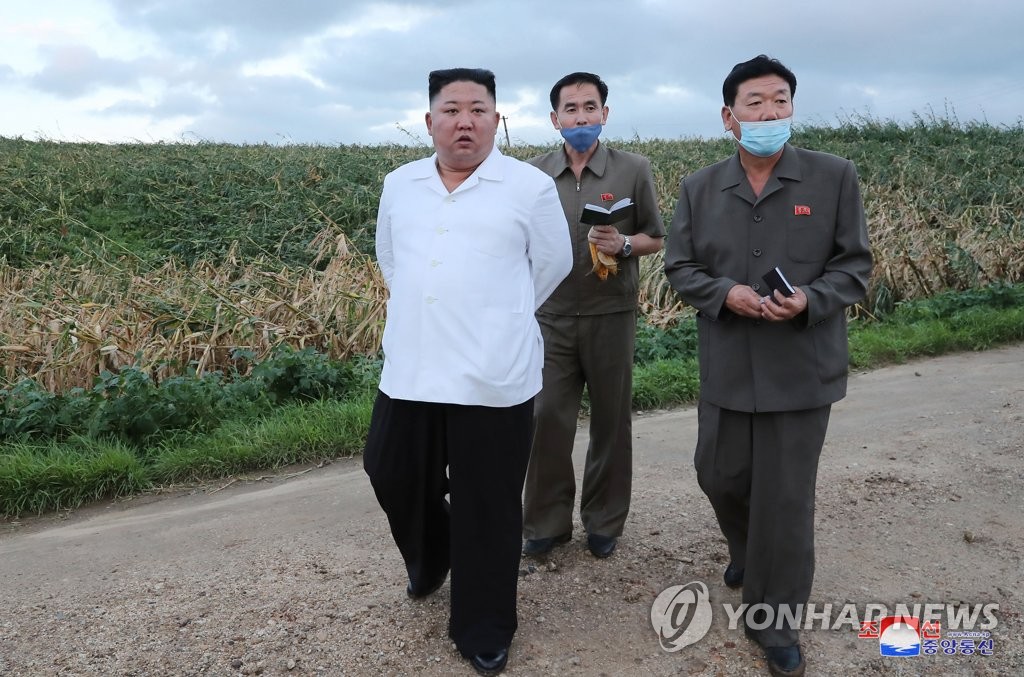 The KCNA did not reveal when his trip took place, but it appears to have come hours after Typhoon Bavi made landfall in South Hwanghae Province early Thursday.

The Rodong Sinmun, the official newspaper of the North's ruling party, said that the typhoon hit farming areas of Hwanghae Province, in particular, dealing a blow to corn stalks, rice paddies and other crops.

Hundreds of acres of farming land in North Hwanghae Province were affected, the paper said, reporting on broken trees, flooded houses and roads in the region. Damage in areas near Pyongyang was also reported. The paper, however, did not mention any casualties.

In an unusual move, the country's state TV network has provided real-time coverage of damage caused by wind gusts and rainfalls in recent days, showing the sense of urgency and efforts to provide updated info on the storm to people.

North Korea had stayed on high alert as it feared the typhoon could be stronger than Typhoon Lingling that devastated many areas of the country last summer.

Kim held a politburo meeting Tuesday, calling for stepped-up efforts to brace for the approaching typhoon and minimize damage.

North Korea has been facing multiple challenges, including the fallout from its protracted antivirus campaign and floods caused by recent heavy downpours.