The agency started to hold a census based on national resident registration records every year in 2016, with the conventional person-to-person survey to be conducted every five years.

Out of the total, the number of South Korean nationals reached 50 million, while foreign residents who stayed in the country for at least three months totaled 1.78 million, accounting for 2.9 percent.

Some 50 percent of South Korea's population, 25.89 million, lived in the capital city area that covers Seoul, Incheon and Gyeonggi Province.

Seoul saw its residents decline 0.4 percent to 9.64 million last year, while people in Gyeonggi Province rose 1.5 percent to 13.3 million. Busan, the country's second-largest city on the southeastern coast, was home to 6.5 percent of the population, or 3.37 million people. 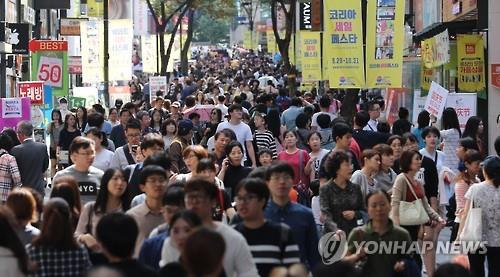 The study showed that South Korea is rapidly aging, with the proportion of people aged over 65 years rising 5.5 percent to 7.75 million last year, making up 15.5 percent of all citizens.

It marks the third straight year that the number of seniors surpassed that of the youth aged zero to 14, which amounted to 6.31 million in 2019.

The agency said the surge is attributable to the country's fast-aging population, coupled with a low birthrate, which fell to a record low in 2019.

There were 20.89 million households in the country last year, up 1.9 percent from a year earlier, with an average of 2.39 members. One-member households were the main family type in 2019, accounting for 30.2 percent, while the typical four-member families took up 16.2 percent.

About 51 percent of South Korean families, or 10.01 million households, reside in apartments, followed by 31 percent living in detached houses.