SEOUL, Aug. 28 (Yonhap) -- The number of daily new coronavirus cases in South Korea dropped to below 400 on Friday, but health authorities decided to enforce tougher social distancing measures in the greater Seoul area for one more week with enhanced guidelines to further stem another nationwide wave of infections.

The country reported 371 new COVID-19 cases, including 359 local infections, raising the total caseload to 19,077, according to the Korea Centers for Disease Control and Prevention (KCDC).

Friday's daily tally marks a sharp drop from the previous day when the country's new virus cases spiked to a nearly six month high of 441. But fewer virus tests on the previous day might have dragged down the number of new cases as some virus screening clinics suspended operation due to Typhoon Bavi.

Still, the number of daily virus cases has stayed in the triple digits for more than two weeks. Since Aug. 14, more than 4,300 cases have been reported in South Korea, mostly tied to a conservative church in northern Seoul and the Aug. 15 Liberation Day rally in central Seoul. 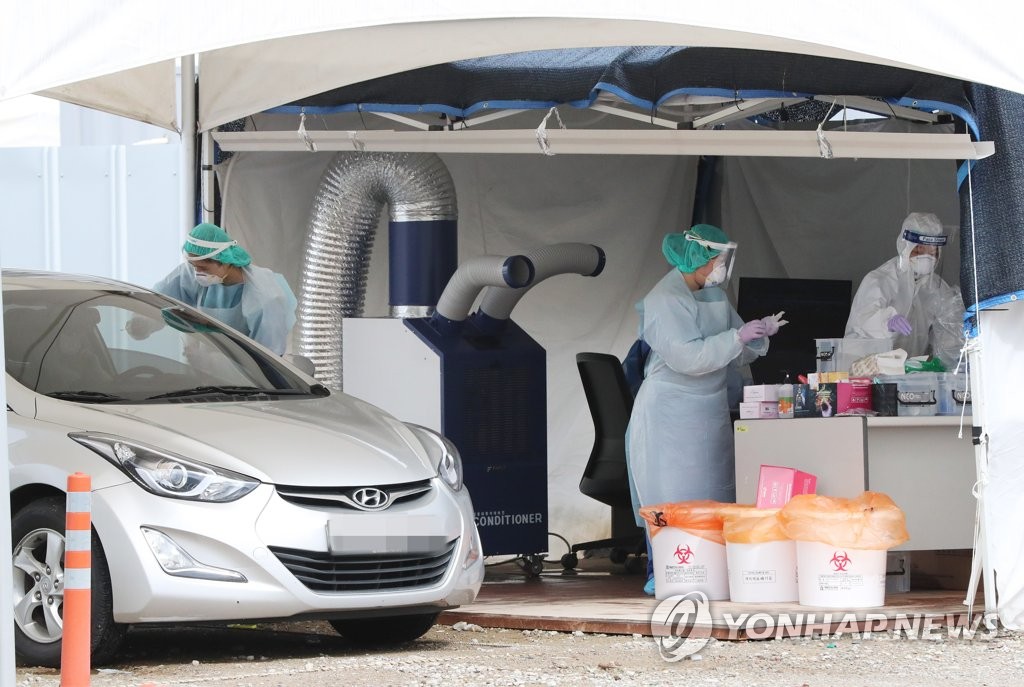 Of the 359 locally transmitted cases, 284 were identified in the capital area, home to half of the country's 51 million population. Seoul added 145 more cases, while the surrounding Gyeonggi Province and western port city of Incheon reported 112 and 27 cases, respectively.

Sarang Jeil Church in northern Seoul -- a hotbed of the recent spike in new infections -- has so far reported 978 COVID-19 cases. The church-linked cases also led to infections in at least 25 locations, with cases reported in nine different provinces and municipalities outside the greater Seoul area.

At least 294 patients have been reported from the Aug. 15 demonstration in central Seoul, with cases identified in 10 different provinces and municipalities outside the greater Seoul area.

South Korea had been getting the virus under control, with the daily new cases staying in double-digit figures, until early August. But multiple cluster infections in the greater Seoul area, from churches to office buildings, started to break out simultaneously and put a strain on the country's virus fight efforts.

To stem the virus spread, health authorities first applied Level 2 social distancing in Seoul and Gyeonggi Province for two weeks starting Aug. 16. The western port city of Incheon was put under the measures three days later before the government expanded the scheme nationwide on Sunday. 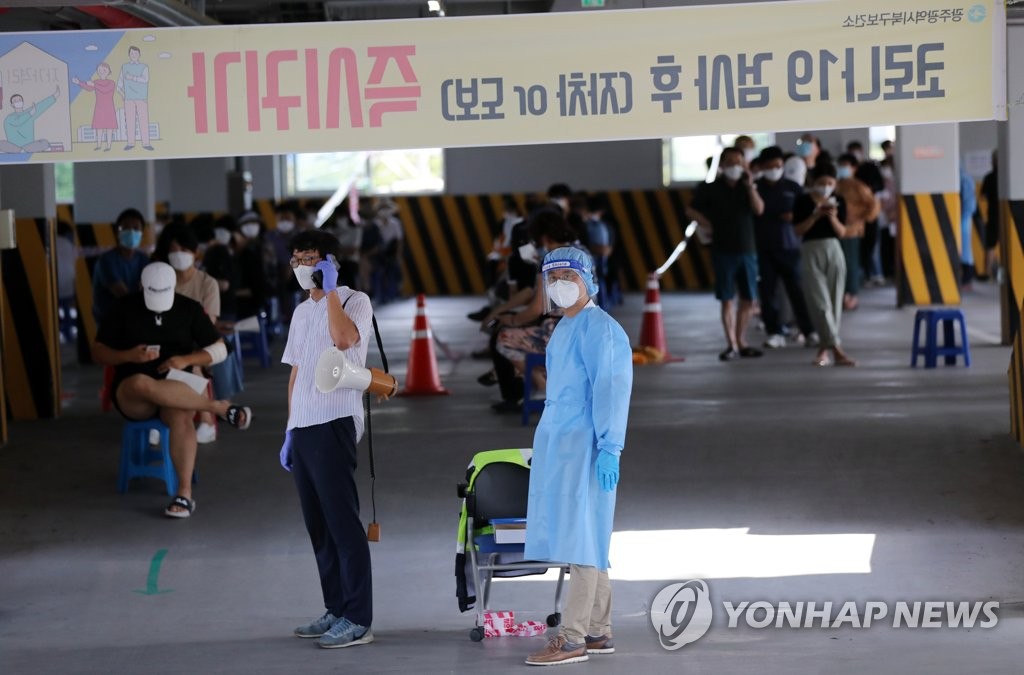 However, since the country's virus situation showed no signs of letup, the government decided to extend the Level 2 distancing for one more week Friday with tighter antivirus measures to take place from Sunday to Sept. 6 in the greater Seoul area.

Under the new guidelines, in-person dining at restaurants and bakeries in the greater Seoul area will not be allowed between 9 p.m. and 5 a.m. Franchise coffee shops will only be able to provide takeout and delivery services.

The government will also issue an administrative order banning gatherings at indoor sports facilities, such as gyms and billiard clubs, in the nation's capital area. Stricter virus preventions measures will be also applied to cram schools and elderly care centers.

One-third of workers at government and public institutions are advised to work from home.

"We see the virus situation in the greater Seoul area very seriously and will give all-out efforts to stem the spread of virus there," Health Minister Park Neung-hoo said.

The accumulated number of COVID-19 cases in the greater Seoul area has reached 7,200, which exceeds that of the city of Daegu -- once the country's virus hotspot following a massive outbreak tied to followers of minor religious sect Shincheonji in late February.

Some municipalities have already adopted tighter measures in advance. For example, the capital city has mandated its citizens to wear face masks. Rallies of 10 or more people are restricted in Seoul.

Health authorities said should the virus situation not improve even with enhanced Level 2 guidelines, the country has no choice but to enforce the toughest Level 3 distancing.

The government has been cautious of implementing the Level 3 distancing as it could heavily undermine people's social and economic activities. 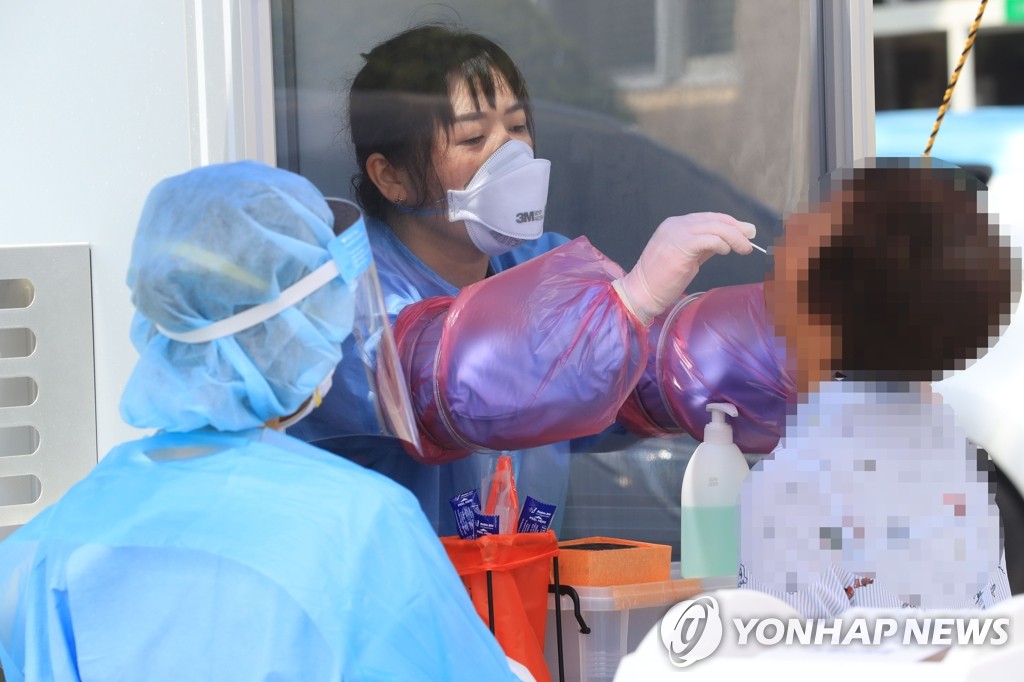 Under Level 3, gatherings of more than 10 people are banned. Not only high-risk facilities, such as clubs, but also mid-risk facilities, including movie theaters, wedding halls and cafes, are advised to suspend their operations.

All sports events are banned, and public facilities are ordered to close. Schools are required to shift to remote learning

The number of newly identified imported cases stood at 12, with eight of them detected at quarantine checkpoints at airports and harbors. The country's total number of imported cases is now at 2,782.

South Korea reported three more death from the coronavirus, raising the death toll to 316. The country's virus fatality rate is now at 1.66 percent.

But the country could see more deaths from the virus as the number of critically ill COVID-19 patients reached 58, up 12 from a day earlier.

The total number of people released from quarantine after making full recoveries stood at 14,551, up 90 from the previous day, with 4,210 people isolated for COVID-19 treatment, up 278 from a day ago.