SEOUL, Aug. 28 (Yonhap) -- South Korea's government on Friday extended the executive order nationwide for doctors who have been on strike to return to work immediately.

It also said it planned to report to police 10 doctors later in the day for violating the executive order issued earlier this week in the Seoul region, making good on its repeated warnings of strong legal action against those who failed to come back to hospitals.

On Wednesday, the government ordered striking trainee doctors and fellows working at training hospitals in Seoul, Gyeonggi Province and Incheon to return to work amid the rapid spread of new coronavirus cases in the capital area.

Those who do not follow the government order without an adequate reason could have their licenses revoked and even face imprisonment of less than three years or a fine of less than 30 million won (US$25,000).

In a joint briefing held at the government complex in Seoul by the Ministry of Health and Welfare, the Ministry of Justice and the National Police Agency, Vice Health Minister Kim Ganglip said the extension and seeking of legal action were "inevitable" to "safeguard people's lives and safety," as the resurgence of the coronavirus was posing a great threat to public safety and doctors' walkout added more trouble to already strained hospitals around the country.

Tens of thousands of practitioners, interns and resident doctors have launched a walkout in protest of the government's medical reform measure to increase the number of medical students.

The three-day strike was to end Friday, but the Korean Intern and Resident Association (KIRA) representing the trainee doctors, as well as fellow doctors, at major general hospitals have said they will continue their walkout indefinitely unless the government reconsiders its plans.

The government said the number of trainee doctors that have walked out stood at 6,070, or 68.8 percent, of the 8,825 interns and residents in the country as of late Thursday. 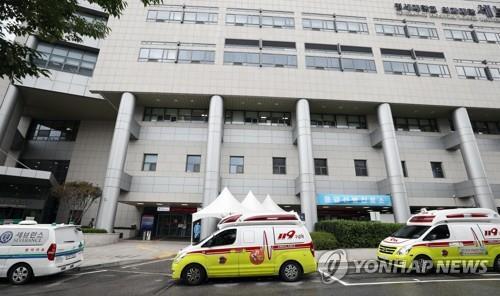