"Biden voted for the NAFTA disaster, the single worst trade deal ever enacted," Trump said in his acceptance speech delivered on the South Lawn of the White House on Thursday, where, according to pool reports, at least 1,000 of his supporters were present.

"He supported China's entry into the World Trade Organization, one of the greatest economic disasters of all time. As vice president, he supported the Trans-Pacific Partnership, which would have been a death sentence for the U.S. auto industry," he added in his 71-minute speech.

Trump also blasted Biden for supporting what he called a "horrendous" free trade agreement with South Korea that he said "took many jobs from our country, and which I've reversed and made a great deal for our country." 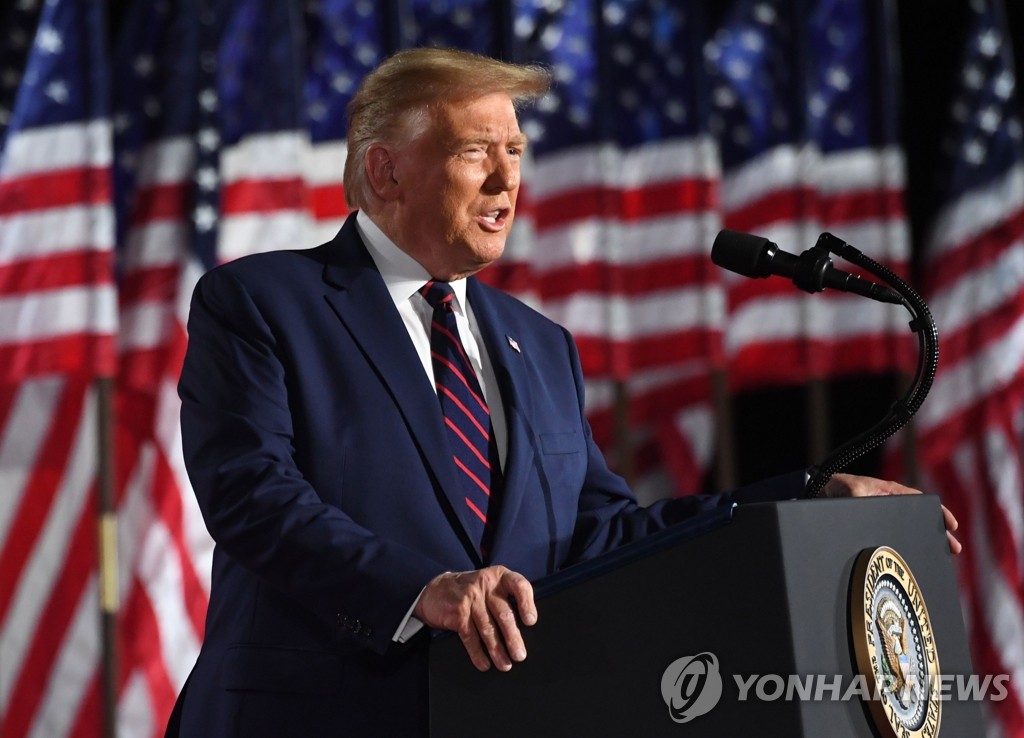 South Korea renegotiated and revised the Korea-U.S. FTA at Washington's request in 2018.

Under the amended agreement, implemented at the start of last year, Seoul agreed to double to 50,000 the number of U.S. vehicles entering its market each year without having to meet its industry regulations.

The U.S., on the other hand, would enjoy an additional 20 years of imposing 25 percent import tariffs on South Korean pickup trucks until 2041.

Trump said he will continue to put America first if reelected.

"I stand before you tonight, honored by your support, proud of the extraordinary progress we have made together over the last four incredible years, and brimming with confidence in the bright future, we will build for America, over the next four years," he said.

While blaming China for taking millions of American jobs, he also repeated his accusation against his Democratic rival of colluding with China's communist leadership.

"China would own our country, if Joe Biden got elected," he told the largest group of supporters so far at the Republican convention or the Democratic convention, which ended a week earlier after a four-day run.

Trump was formally nominated in a unanimous vote by the Republican National Convention Committee on Monday, the first day of the four-day convention, which until Trump's acceptance speech had mostly remained virtual.

He also sought to shift the blame for the widespread new coronavirus, which he calls a China virus, to China and Biden, claiming China could have stopped the virus but allowed it to spread to the rest of the world, and that Biden had opposed issuing a travel ban on China.

"Joe Biden called it hysterical and xenophobic. ... If we had listened to Joe, hundreds of thousands more Americans would have died," Trump said.

"Unlike Biden, I will hold (China) fully accountable for the tragedy that they caused all over the world," he said.

Still, Trump claimed because of his bold decision to quickly shut doors to visitors from China, the U.S. now has one of the lowest case fatality rates among any major countries in the world.

"The European Union's case fatality rate is nearly three times higher than ours, but you don't hear that," he said.

The U.S., however, leads the world in both the number of confirmed cases of COVID-19 and deaths with over 5.7 million cases and 177,000 deaths as of Thursday, according to the World Health Organization.