SEOUL, Aug. 29 (Yonhap) -- When he was mowing down hitters in the second half of the 2019 Korea Baseball Organization (KBO) season, Hanwha Eagles' left-hander Chad Bell didn't throw his slider much. 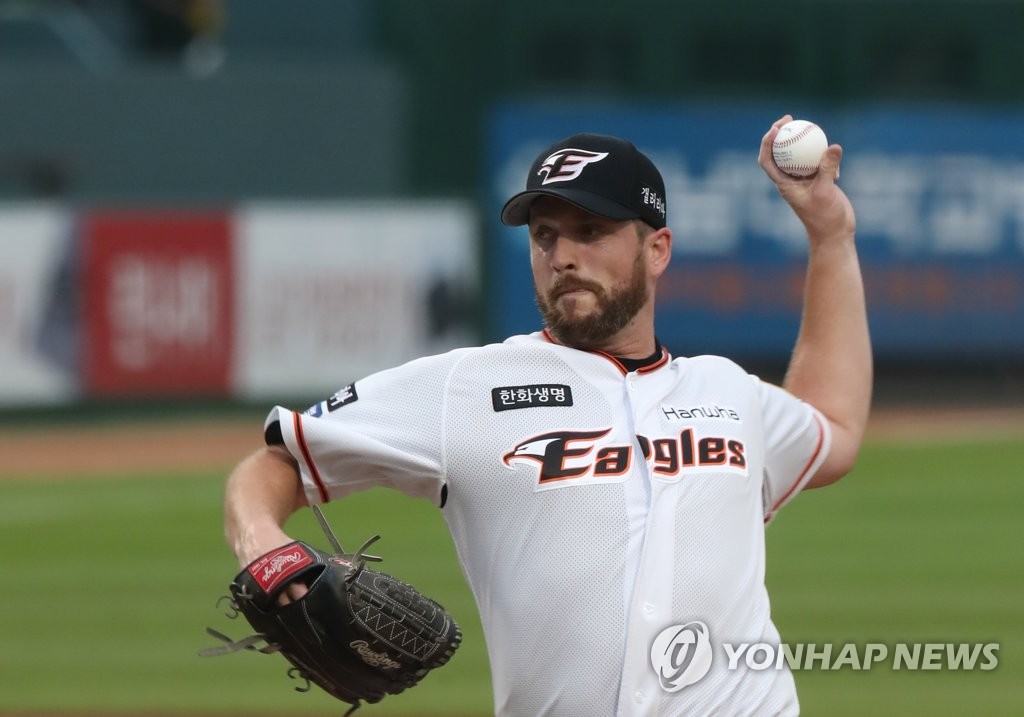 Almost exactly a year later, the story has changed dramatically. In two of his past three starts, Bell threw his slider nearly a quarter of the time, making it the second-most-used pitch after his fastball.

And the results? Bell is 2-0 with only one run allowed in 19 innings in those three games.

They are also only two victories for the season for the resurgent ace, who missed some time at the start of the season and again in July with forearm issues. He had been 0-7 with a 7.94 ERA in his first 10 starts through Aug. 9.

Bell tossed six scoreless innings against the Samsung Lions in a no-decision on Aug. 15, with a season-high seven strikeouts. He followed that up with six innings of one-run ball against the KT Wiz on Aug. 21 for his first W of 2020. He set a new season best with eight Ks.

Then on Thursday, Bell held the Lions scoreless over a season-high seven innings to win his second consecutive start in the Eagles' 7-0 win. For the first time this year, he didn't walk anyone.

"My curveball and slider have been a lot more consistent," Bell told Yonhap News Agency in a phone interview Friday. "I made a couple of adjustments on my delivery. On my slider especially, the velocity jumped a little bit, and the break is a lot later and sharper." 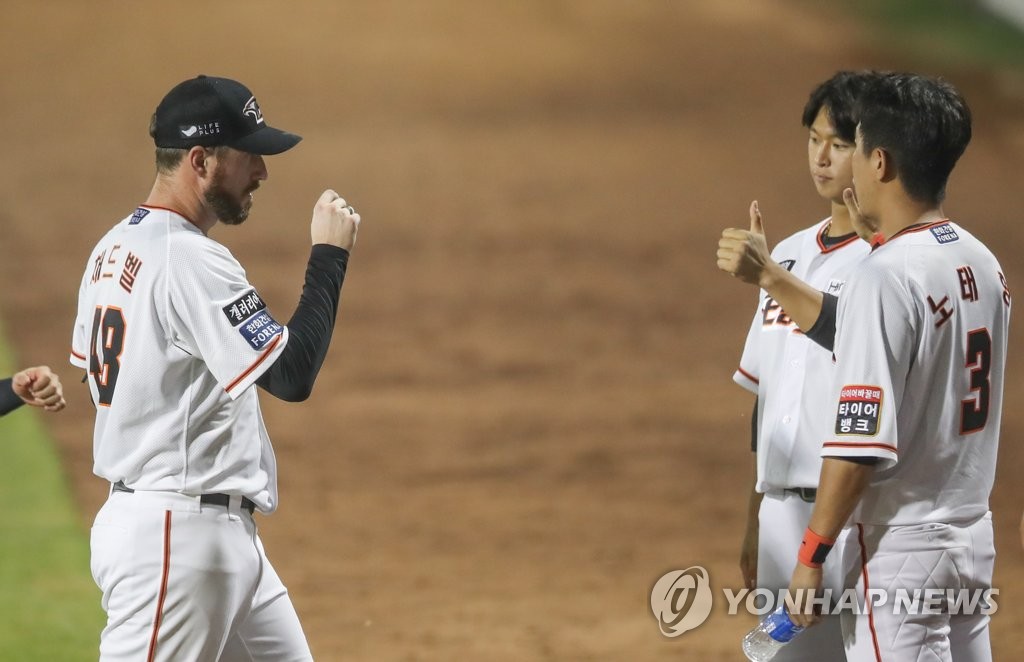 Bell conceded that he may have been "stubborn" in relying too much on his fastball earlier this season.

"It was hard to get away from that, after seeing my success last year," said Bell, who didn't throw any sliders in each of his first three starts. "Pounding fastballs didn't work (early this season), but I didn't make the adjustments fast enough, because I didn't feel like my breaking pitches were great, either. Confidence in those two pitches (slider and curveball) has really jumped, and I will try to keep building off of that."

Bell said a loose body inside his elbow gave him trouble early in the season, and in particular, it affected his recovery time between starts. 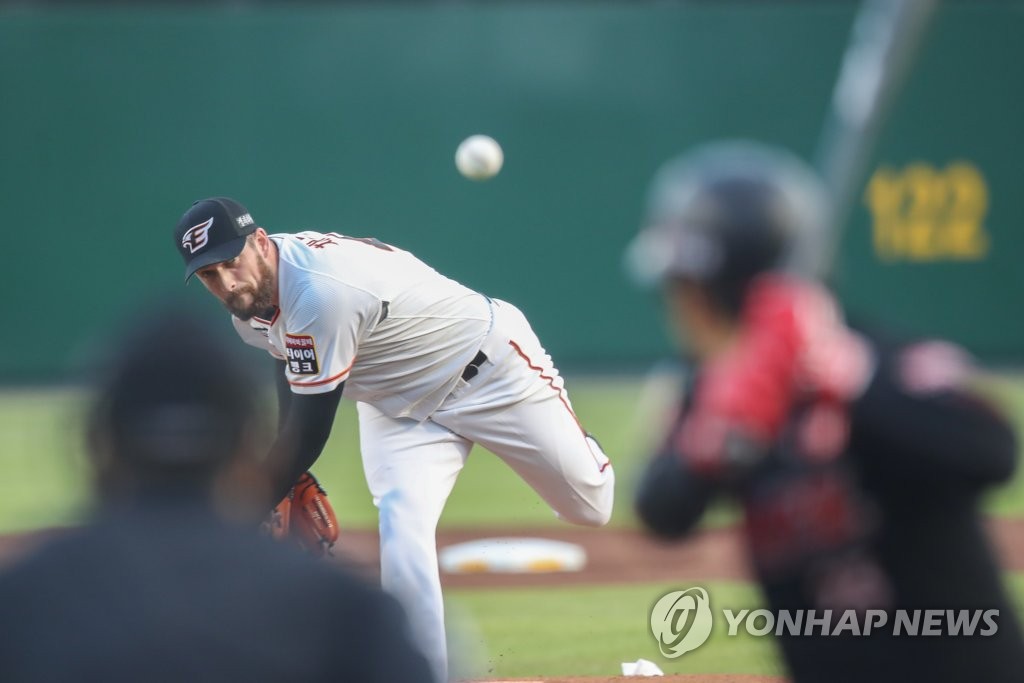 "I felt like it was throwing me off mechanically. It was hard to get back all the way to 100 percent," Bell said, adding that he won't need an operation as long as he can pitch pain-free the rest of the season.

"I've changed a bit of between-start routines," he said. "(My trainers and I) have found something that works right now, and we're going to keep going with that. My pitch count is back up to normal, right around 100 pitches, and (the elbow) doesn't seem to be affecting my stuff."

Bell admitted it had been "frustrating" at times to see how all the work he was putting in between starts wasn't paying off. That and some rough outings on the mound conspired to take away some confidence from the pitcher, but the turnaround this month has addressed that issue. 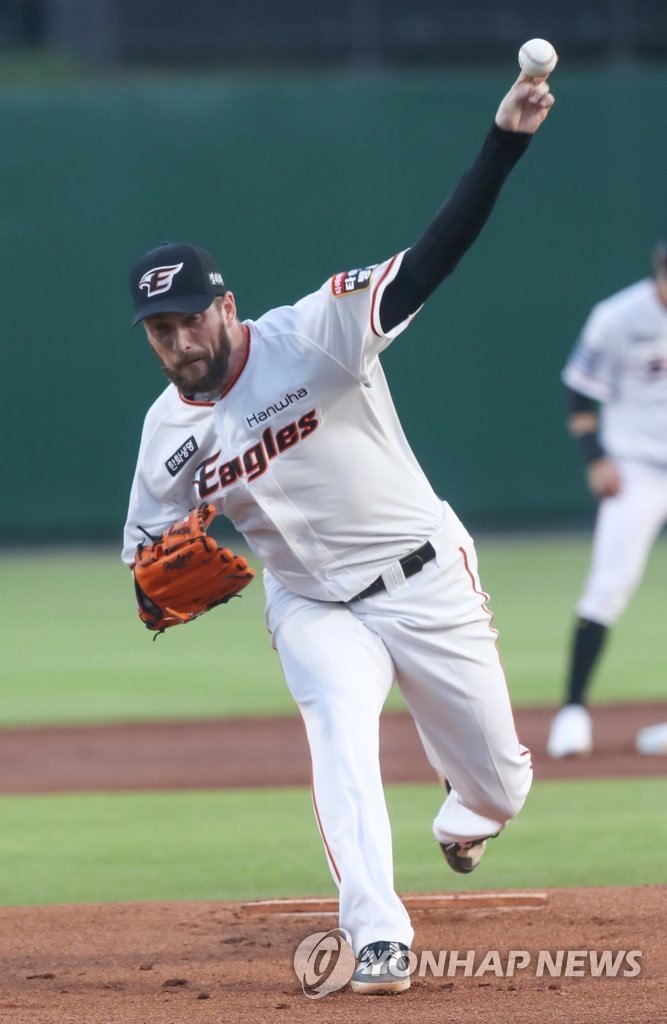 Among starters in August, Bell ranks second in opponents' batting average with .197, fourth in opponents' on-base plus slugging percentage (OPS) with .588 and fourth in walks and hits per innings pitched (WHIP) with 1.09,

Though Bell is finally pitching like the ace that he was last season, it has come too late for the Eagles. Through Thursday's action, they remained in last place at 24-65-1 (wins-losses-ties). They were 23 games out of the fifth and the final playoff spot with 52 games remaining, all but mathematically eliminated from the postseason.

For Bell, his objective for the rest of the season is twofold. One, he wants to stay healthy and "keep giving guys a chance to win every time I am out there." Two, he wants to see young pitchers continue their growth.

The 31-year-old American reeled off names like Kang Jae-min and Yun Dae-kyung as talented young pitchers to watch.

Kang, a 23-year-old rookie selected in the fourth round of last year's draft, has been a revelation out of the bullpen in the second half. He has a 2.03 ERA in 26 2/3 innings with 35 strikeouts and zero home runs allowed. He has come on strong in August, with no run given up in his last 10 innings across 10 outings. 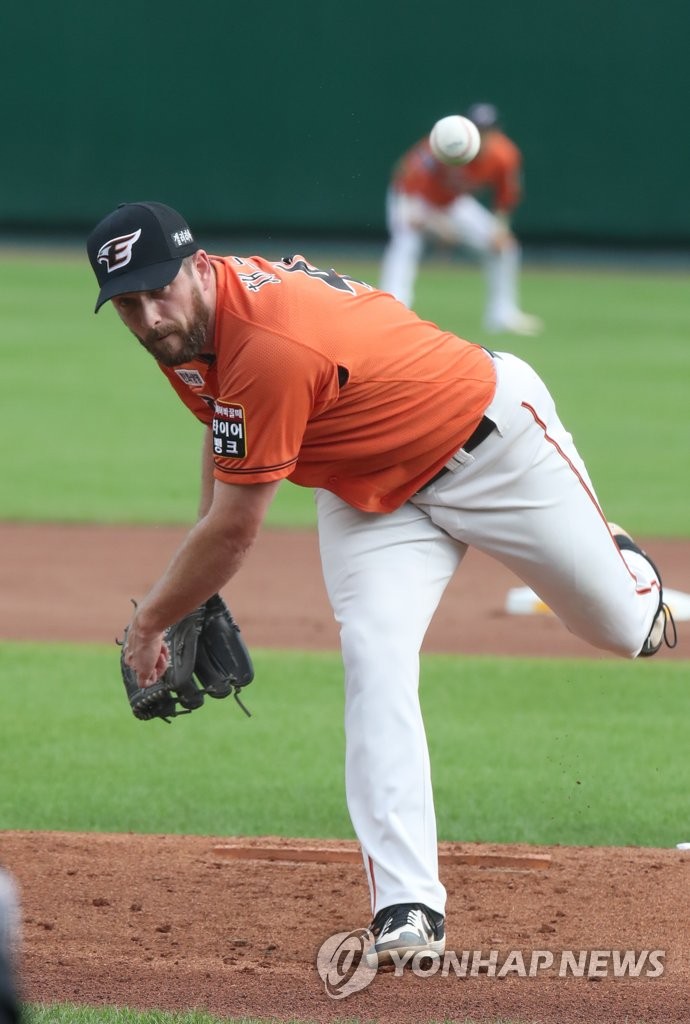 Yun is late to the party, pitching in his first KBO season at 26. Since his debut on June 3, Yun has posted a 1.67 ERA across 27 innings. He hasn't been charged with an earned run over his past 12 appearances, covering 12 innings.

"It's a lot of fun to see their energy," Bell said. "They're going to make mistakes. But you see them play hard every day and love being at the field. The one impressive thing about them is they don't look scared. They're confident when they're out there."

Bell said the key for these young hurlers is to keep learning, saying he'll be there for them to ask any questions they may have.

"If they want to learn, they're going to be successful," he said. "I am still figuring stuff out and I've played for 10 years. When you think you've all got it figured out, that's when things may not start going well for you." 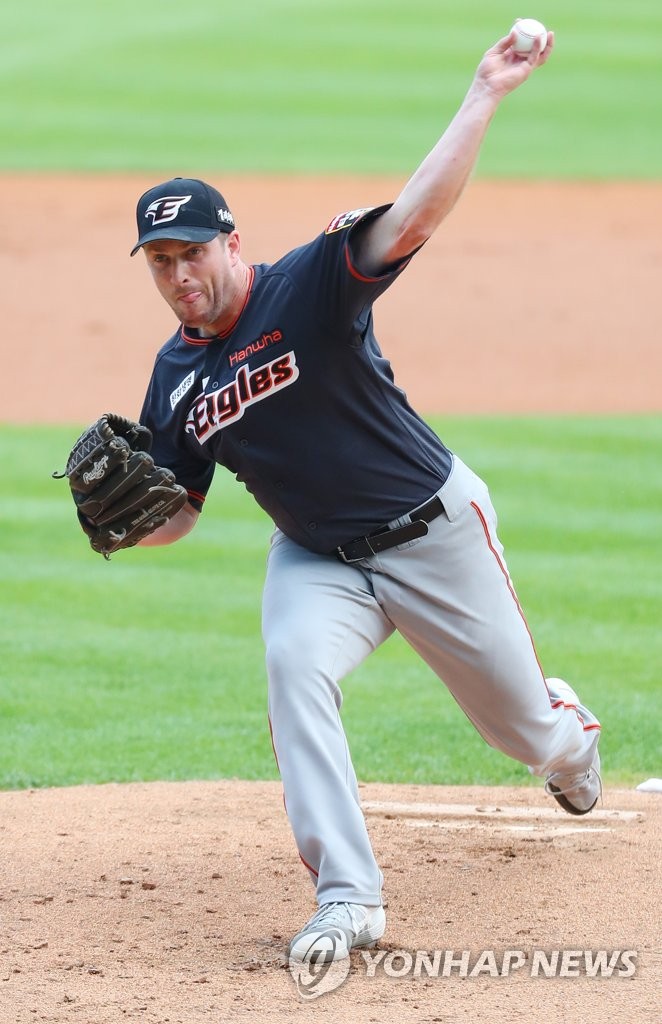