SEOUL, Aug. 28 (Yonhap) -- Japanese Prime Minister Shinzo Abe's envisioned departure from office due to a chronic illness is raising expectations for a shift for the better in relations between Seoul and Tokyo, long strained over wartime history and trade.

Capping weeks of burgeoning rumors on his health and path forward as premier, Abe announced his intent to bow out -- a move closely watched here for its implications on the relations between the two countries still haunted by mutual animosity stemming from Tokyo's 1910-45 colonization of the Korean Peninsula.

"I have decided to step aside from my post," the country's longest-serving premier told a press conference, adding he will stay in office until a successor is picked. 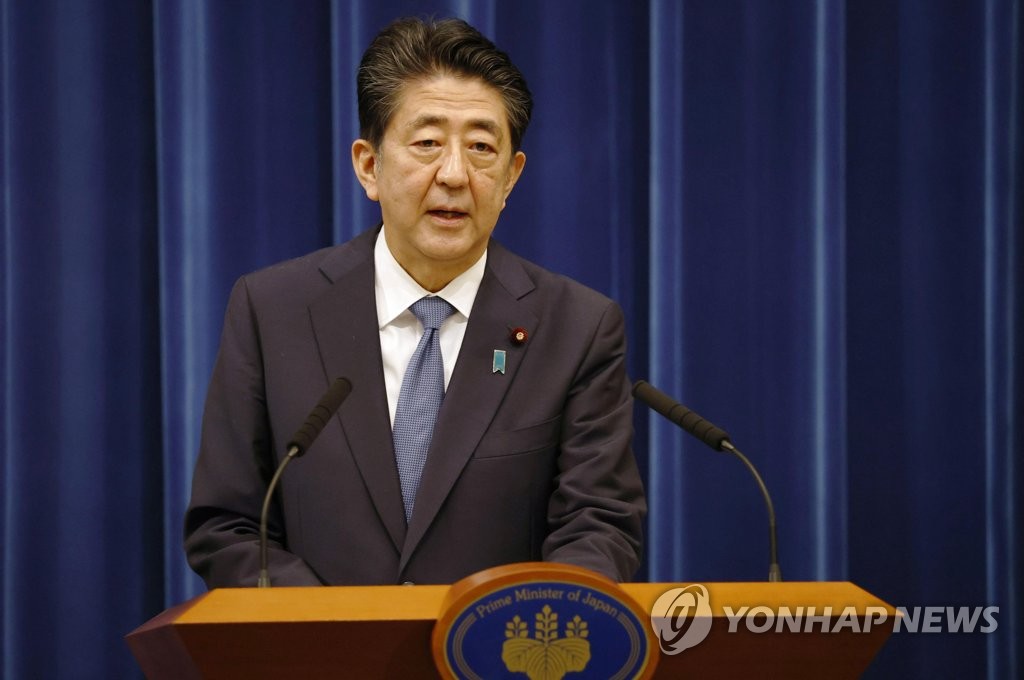 Marked by historical revisionism and a push for heavier armament that evoked bitter memories of Japan's past militarism, Abe's second term since 2012 has seen a grab bag of unfortunate events with Korea, many linked to the two countries' historical and territorial spats.

But the planned exit of the hawkish premier could give much-needed room for Seoul and Tokyo to explore realistic ways to mend fences and look to the future to jointly confront such shared challenges as North Korea's military threat, analysts said.

"Abe's departure could set the mood or generate a momentum for a turnaround in relations between Korea and Japan, given that he was one of Japan's post-war representative, revisionist, right-wing politicians," said Park Won-gon, a professor of international politics, at Handong Global University.

"South Korea might need to make the best use of the transitional period in Japanese politics to get bilateral relations back on track," he added.

Relations between the two countries have been on a downward trajectory since Japan imposed stricter export restrictions in July last year in retaliation for the 2018 South Korean Supreme Court ruling that ordered Japanese firms to compensate victims of wartime forced labor.

Tokyo went further by removing South Korea from its "white list" of favored trade partners in the following month, triggering a similar step from South Korea in a tit-for-tat move.

Seoul hit back with a plan to end its military intelligence-sharing pact with Tokyo, though it suspended the plan months later due to opposition from the United States, which sees the pact as a crucial platform to promote its trilateral security cooperation with its two Asian allies.

Tensions have continued to heighten as the long-simmering issues of Japan's wartime sexual slavery and forced labor have continued to flare up, with the conservative Japanese government refusing to fully accede to victims' calls for sincere contrition and compensation.

A 2015 deal between Seoul and Tokyo to address the conundrum surrounding former sex slaves, euphemistically called "comfort women," raised the prospect of an end to the wartime humanitarian issue. But its enforcement fell apart amid criticism that the deal was reached without full consent from the victims.

During Abe's stint, the forced labor issue was also brought to the fore following the 2018 court ruling. But Korea and Japan have failed to compromise, with Tokyo insisting that all colonial-era reparation issues were settled under a 1965 treaty that normalized bilateral ties.

In December 2018, historical animus appeared to be spilling over into the security domain, as a Japanese maritime aircraft conducted a menacing flyby close to a South Korean warship, claiming that the vessel locked its fire control radar on the plane.

To restore ties with Japan, President Moon Jae-in has reiterated Seoul's two-track approach of separating the cooperation agenda from historical issues, calling for a resolution of thorny issues through dialogue. But such calls seemed to have fallen on deaf ears.

"Abe has done politics in a unique way, taking the lead in pushing for policy initiatives and seldom wavering by factional pressures," Nam Chang-hee, a professor of international politics at Inha University, said.

"But the power dynamics of his ruling Liberal Democratic Party is still at work, and the right-wing group, Japan Conference, still exercises influence, meaning Abe's successor, whoever that may be, would find it difficult to make an abrupt policy shift," he added.

As for Abe's successor, Chief Cabinet Secretary Yoshihide Suga, Shigeru Ishiba, a former defense minister, and others have been mentioned.

Suga, a close aide to Abe, could favor policy stability if elected, while Ishiba is a less likely candidate given his weak foothold within the ruling party, observers said.

A change in Japan's policy toward South Korea can lead to a thaw in bilateral ties only when Seoul is ready to embrace it, experts said, calling for the Moon administration to pay more policy attention to improving the relationship.

"Even though a diplomatic opportunity arises from the departure of Abe, there is no guarantee that the Seoul government is ready to grab it in a more flexible manner," said Chun In-young, a professor emeritus at Seoul National University.

"Seoul has so far focused mostly on relations with Pyongyang and Beijing, a reason why I am cautious to be optimistic that relations with Japan will improve soon," he added.