SEOUL, Aug. 29 (Yonhap) -- South Korean boy group BTS set yet another milestone in South Korea's music history Saturday, with its new song "Dynamite" grabbing the No. 3 spot on Britain's Official Top 100 Singles Chart in the first week of its release.

No. 3 on the British music chart marks the highest debut spot for any South Korean musician so far. 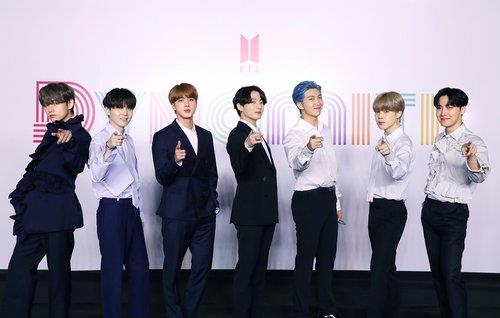 BTS' best performance on the UK's Official Singles Chart was the 13th spot.

"The entry marks the group's strongest Week 1 entry on the chart, being their highest charting song to date and first Top 10 single. Their previous UK singles chart peak was Number 13 with Boy With Luv ft. Halsey last April," the Official Charts said.

""We feel humbled and honoured to have earned a new personal best on the UK Official Singles Chart. First and foremost, we give all credit to ARMY - without their support and love from Day 1, we wouldn't have come this far," the South Korean septet was quoted as saying, referring to its global fan base called ARMY.

Psy is the only South Korean musician to have ever taken the top spot on the Official Singles Chart with his 2012 global hit "Gangnam Style."

"Dynamite" has already made a successful debut on the Billboard, taking the 30th spot on its Pop Songs radio airplay chart earlier this week.

The online edition of American business magazine Forbes has noted BTS' new song may "explode to No. 1" on Billboard Hot 100 when the chart is refreshed next week.
(END)