WASHINGTON, Aug. 27 (Yonhap) -- North Korea may not have yet experienced a major outbreak of the potentially deadly new coronavirus but will require serious international assistance if it does, given its poor health system, the special U.N. rapporteur on North Korean human rights situation insisted Friday.

Tomas Ojea Quintana said he or anyone else at the world body had not enough information to accurately tell the current situation in the impoverished North, but noted the country may not have yet faced a "major outbreak in the whole country."

"I don't want to base my statement on speculations. I wish I could have the information about this so then I can help the government and the people suffering from an outbreak of COVID-19 to overcome this situation," he said in a virtual seminar hosted by Washington-based nongovernmental organization, the Committee for Human Rights in North Korea. 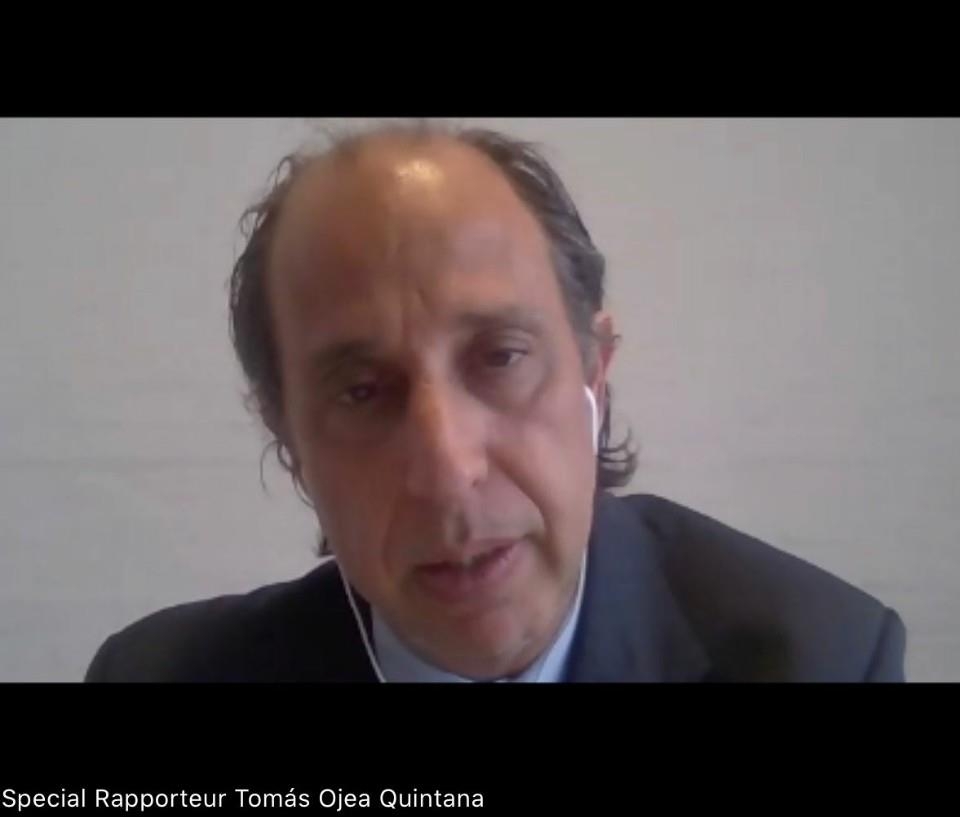 Ojea Quintana partly attributed such a lack of information from North Korea to Pyongyang shutting down its borders in the face of the COVID-19 pandemic, which he noted has also led to a dramatic reduction in the number of North Koreans escaping the communist state.

"We are losing eyes and ears to see and understand what is actually going on in North Korea, at the moment," he said, adding Pyongyang has also cut the number of international aid workers stationed there.

The U.N. rapporteur insisted the North may be moving in the wrong direction by further isolating itself from the rest of the world, also narrowing its doors for humanitarian assistance.

"Given the poor health conditions of the vast majority of the population and the poor infrastructure with regards to health in the country, the outbreak of COVID-19 in North Korea would be a disaster," he said. "It is our challenge, I think as an international community, to avoid further isolation. It is not the answer."

On a related note, the special rapporteur said he would "very clearly" support proposed barter or goods-to-goods transactions between the South and North Korea if they are aimed at providing humanitarian assistance to the North, noting the U.N. too offers its assistance in goods, not only to North Korea but any other country in need.

The special rapporteur also repeated his concerns over the treatment of North Korean defectors in China, urging Beijing to comply with the U.N. convention on refugees.

"Coming from a treaty ratified by the government of China, they should demonstrate that they are a state that respects their own commitment," said Ojea Quintana.

China refuses to recognize North Korean defectors as refugees and regularly repatriates them back to their communist homeland, where they often face severe punishment.

Ojea Quintana argued the U.S., as well as the U.N. Security Council, must discuss and push for ways to improve North Korean human rights conditions in connection with their efforts to denuclearize the North.

To North Koreans, the special rapporteur noted he may not be heard by those living in North Korea, but said they "should know that there are many, many people around the world and organizations, willing to help them enjoy a better life...and that we will never stop in our struggle until that happens."

N. Korea yet to face major outbreak but will need assistance: U.N. rapporteur

N. Korea yet to face major outbreak but will need assistance: U.N. rapporteur