SEOUL, Aug. 30 (Yonhap) -- Prime Minister Chung Sye-kyun on Sunday pressed striking trainee doctors to come to the negotiating table as he lashed out at them for turning a blind eye to patients.

Chung expressed "deep regret" over their decision to continue the indefinite strike and urged the Korean Intern and Resident Association to scrap their strike.

His comments came hours after the association's emergency task force voted in favor of the walkout in the second round of voting that ended earlier in the day. The first round was voted down due to lack of quorum. 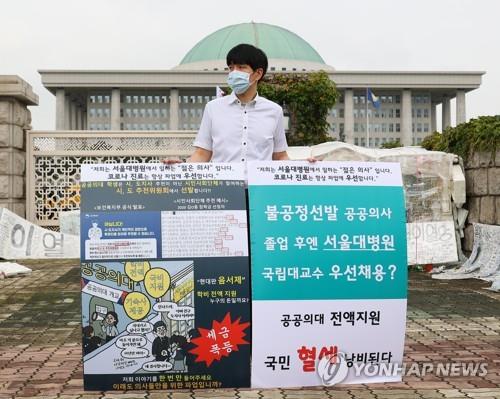 Thousands of trainee doctors working at the country's general hospitals began the strike on Aug. 21 to protest the government's medical reform scheme.

The collective action could further stretch medical staff at a time when South Korea is struggling to contain the spread of the coronavirus.

On Sunday, South Korea reported 299 new COVID-19 cases, including 283 local infections, raising the total caseload to 19,699, according to the Korea Centers for Disease Control and Prevention. Two more patients died, raising the death toll to 323.

The association's emergency task force decided to continue the indefinite strike, despite the government's order to return to work.

"The government has no choice but to react in line with the law and principle to protect the lives and security of people," Chung said.

Son Young-rae, the spokesperson of the health ministry, also called for the striking doctors to return to work, calling an act that demands the sacrifice of patients "injustice."

Son warned that the government will take "legal procedures" first against the striking doctors directly linked to operations of emergency and intensive care units.

"Rejecting their work amid a surge in medical demand during the COVID-19 crisis is leading to greater damage on the part of patients. If they have intended (this) deliberately, their intention is immoral," Son told a press briefing.

He added that the collective walkout that "crosses the reasonable line" is an "unjust and illegal" act.

The Korean Medical Association (KMA) called the government's warning against the emergency and intensive care medical staff a "declaration of death for the essential medical sector."

"Living as an essential medical doctor now means becoming the first subject of state control and punishment in addition to his or her heavy responsibility and low treatment," the association said in a statement.

Amid rising pressure from the government, a fissure in the trainee doctors' association emerged, as key members of its emergency task force offered to step down in protest over the walkout decision.

The members claimed that the association's leadership pushed for the strike, although a majority of the task force members wanted to halt the walkout.

Anxiously watching the two sides on a collision course, an association of patients urged them to strive harder for a compromise.

"The government and doctors should immediately stop the current confrontation that is heading into a catastrophe, and normalize treatment for patients," it said.

Some citizens staged an online boycott of hospitals that were closed due to the walkout.

Adding to woes is a separate strike planned by the KMA, which represents some 130,000 doctors across the country.

The KMA ended its three-day walkout last Friday, but it also said it will launch an indefinite strike on Sept. 7 unless the government withdraws its new policies, including a plan to increase the number of medical students.

Separately, the Korean Medical Student Association said 93.3 percent of 3,036 people who applied for the Korean Medical License Examination set for September and October canceled their applications in protest of the government's medical reform scheme.