SEOUL, Aug. 31 (Yonhap) -- K-pop band BTS picked up four awards at the 2020 MTV Video Music Awards held in the United States on Sunday (U.S. time), while putting on its first television performance of its hit single "Dynamite" on the American TV network.

The South Korean septet won in the categories of best pop, best group, best K-pop and best choreography with "ON," the lead song off the band's studio album "Map of The Soul: 7" released in February, at the awards show held in New York City without an in-person audience and performances due to COVID-19.

With "ON," BTS became the first Asian act to win in the highly competitive category of best pop.

Other nominees who competed for Best Pop included Halsey with "You Should Be Sad," Jonas Brothers with "What a Man Gotta Do," Justin Bieber with "Intentions" featuring Quavo, Lady Gaga with "Rain On Me" featuring Ariana Grande and Taylor Swift with "Lover." 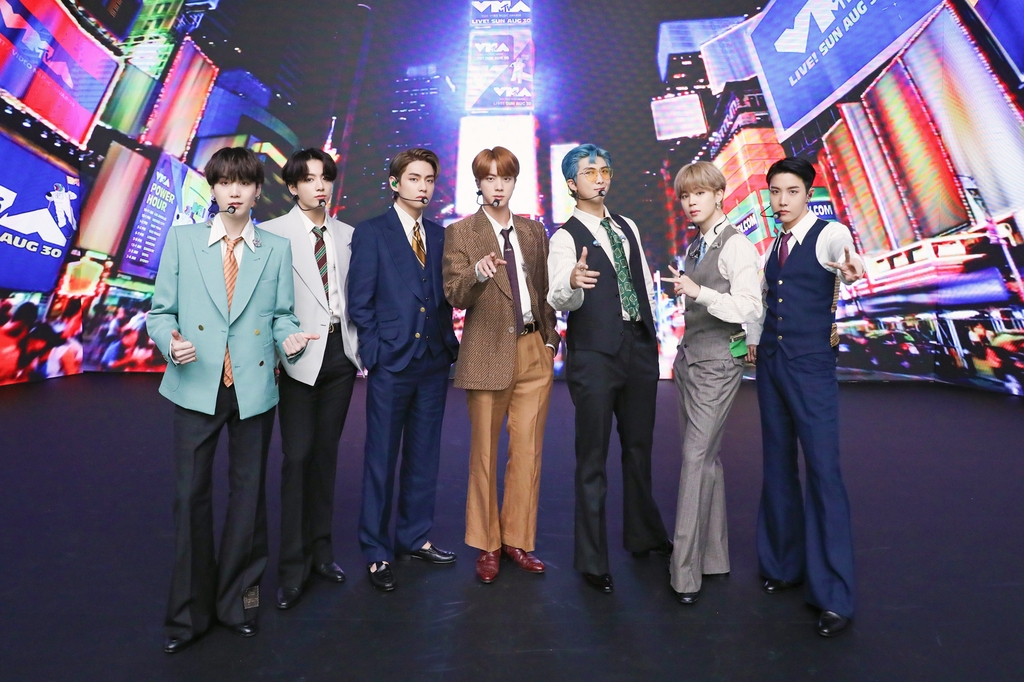 "We are truly honored, and we want to give credit to our fans ARMY," BTS member Junggook said in an acceptance speech for best pop delivered virtually, thanking its global fan base referred to as ARMY.

"ON" peaked at No. 4 on the Billboard Hot 100 upon its release in March, the strongest showing ever for a K-pop group on Billboard's main singles chart. As a whole album, "Map of the Soul: 7" topped the Billboard 200 albums chart and was also the top selling record in the U.S. during the first half.

Donned in classic attire, such as suits, ties and vests, the band performed in front of backdrops of what appeared to be key landmarks of New York City, such as the Brooklyn Bridge and Times Square. The performance was later capped off with virtual fireworks in the background.

"We've never been there, first time ever, so we're very nervous," said RM, sharing his thoughts on the band's first-ever performance at the MTV music award show. 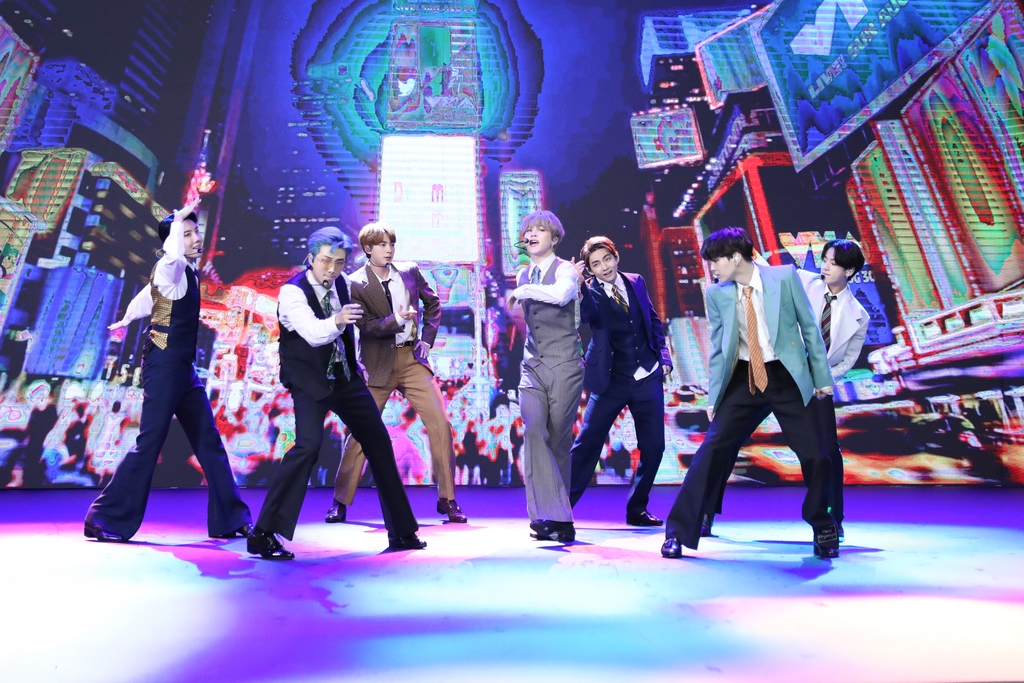 "It can never be more special. We treasure each moments with them. This performance is for you ARMY," BTS singer V added.

BTS members mentioned American singers Lady Gaga and Doja Cat as artists they hoped to collaborate with in the future.

Since its Aug. 21 release, "Dynamite" has been met with raving responses, with its first-week metrics on various fronts pointing toward a massive debut on the Billboard Hot 100, which factors in physical and digital sales, radio play and streaming.

The highest-charting South Korean artist ever on the Hot 100 was PSY with his 2012 viral hit "Gangnam Style," which peaked at the No. 2 spot. "Dynamite" debuted at No. 3 on Britain's Official Top 100 Singles Chart on Friday (local time).

Among other K-pop artists, BLACKPINK won the song of summer category with its hit single "How You Like That."

"How You Like That" garnered an enormous international following upon its release, setting five new records recognized by Guinness World Records with the song's music video on YouTube and landing at No. 33 on the Billboard Hot 100 chart in the United States.

The song also peaked at No. 2 on Spotify's Global Top 50 chart, for a while becoming the highest-charting K-pop track on the international streaming service. BTS' "Dynamite" last week broke the record, debuting at the top spot on the chart.