SEOUL, Sept. 1 (Yonhap) -- South Korea's electricity consumption is feared to shrink more than 3 percent in 2020 as the coronavirus outbreak batters the economy, a report showed Tuesday.

In its latest report, KEPCO Research Management Institute predicted the country's 2020 power sales to dip up to 3.3 percent on-year in the worst case scenario.

The projection is based on an assumption that Asia's fourth-largest economy may contract 3 percent in 2020 from a year earlier due to the fallout from the coronavirus pandemic.

The figure would flirt with the 3.6 percent on-year decline recorded in 1998 in the aftermath of the country's foreign exchange crisis. 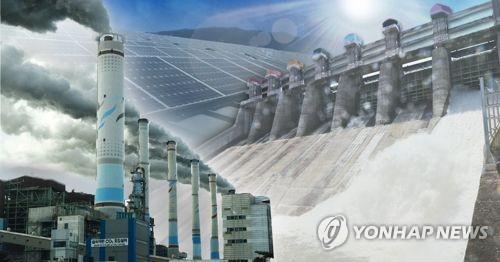 Pounded by the COVID-19 outbreak, the country's power usage has been on the decline this year. Electricity consumption contracted 1.8 percent on-year in the first quarter of the year and 4.2 percent in the second quarter.

For all of 2020, industrial electricity sales are expected to decrease a maximum 5.1 percent, while household use is projected to increase up to 4.6 percent as more people work from home.

The value of electricity sales is thus forecast to reach between 55.5 trillion won (US$46.8 billion) and 56.1 trillion won this year, compared with last year's 56.6 trillion won.

The expected fall in electricity sales and revenue is feared to have a negative impact on the performance of KEPCO, the country's state-run utility firm.

In the first half of the year, KEPCO turned a profit thanks to falling fuel costs, despite a 2.9 percent drop in electricity sales.
(END)