SEOUL, Sept. 1 (Yonhap) -- The foreign ministry said Tuesday that it is requesting a 3.6 percent increase for next year's budget with a focus on strengthening digital capabilities for non-face-to-face diplomacy and cooperation with the United States and China.

The ministry proposed 2.84 trillion won (US$ 2.39 billion) for the 2021 budget, an increase from 2.74 trillion won this year, as it seeks to beef up contactless diplomacy in the wake of the COVID-19 pandemic and cope with growing geopolitical tensions from a Sino-U.S. rivalry.

"The foreign ministry's budget proposal contains various new projects that can help expand the country's diplomatic horizons while actively responding to the COVID-19 situation that makes it difficult for us to conduct face-to-face diplomacy that we actively carried out in the past," the ministry said in a press release.

"It is expected to correspond to a new diplomatic paradigm which is to bolster non-face-to-face exchanges," it added.

The ministry's budget proposal includes 10 billion won to digitalize accounting and work support programs for some 180 overseas diplomatic missions, and 6.7 billion won to beef up public diplomacy through a digitalized platform.

The ministry also proposed 3.7 billion won to deepen cooperation with the Association of Southeast Asian Nations, a key partner for its signature New Southern Policy. It is more than double this year's budget of 1.8 billion won.

For the official development assistance, the ministry seeks to spend 963 billion won, a 4.9 percent increase from this year. 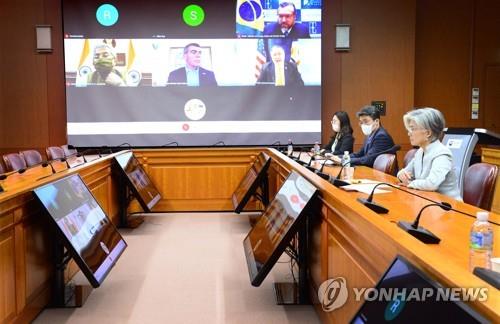