The game affiliate of Kakao Corp., which operates the country's most-used mobile messenger KakaoTalk, has allowed general investors to subscribe to 3.2 million shares, or 20 percent of its 16 million new common shares to be sold under the planned IPO.

Investors are required to post 50 percent of the value of shares they want to buy as a deposit.

Analysts expected the subscription rate for Kakao Games' offer to exceed that of an IPO by SK Biopharmaceuticals Co., which sparked a subscription craze among retail investors. 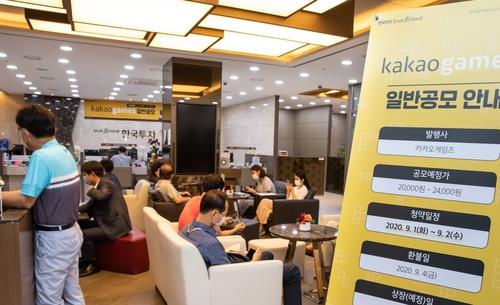 Late last month, Kakao Games carried out a demand forecast that found the portion of shares offered to public investors would be 1,479 times oversubscribed.

Founded in April 2016, Kakao Games broadened its scope not only in South Korea but across Asia with the help of KakaoTalk. As of end-June, Kakao Corp. owned the largest 58.96 percent stake in Kakao Games.

Kakao Games currently has over 45 million monthly active users, with mobile titles such as Black Desert Online and Lord of Dice. The company also published "PlayerUnknown's Battlegrounds" in the country.