SEOUL, Sept. 1 (Yonhap) -- Leading scholars from South Korea and abroad voiced concerns Tuesday that a growing Sino-U.S. geopolitical rivalry may blunt the momentum for international cooperation in the post-coronavirus era, despite the pandemic raising the need for greater global solidarity.

During the opening day sessions of the annual Seoul Defense Dialogue, some experts stressed the role of middle-power states, like South Korea, and multilateral institutions in fostering cooperation to tackle shared challenges, such as infectious diseases, climate change and terrorism.

Some participants took part in the three-day forum hosted by South Korea's defense ministry via video links due to the pandemic.

"I think the post COVID-19 world will be characterized by very severe and intensive competition between the U.S. and China. It is kind of the beginning of the new Cold War," said Yoon Young-kwan, a former South Korean foreign minister and professor emeritus at Seoul National University. 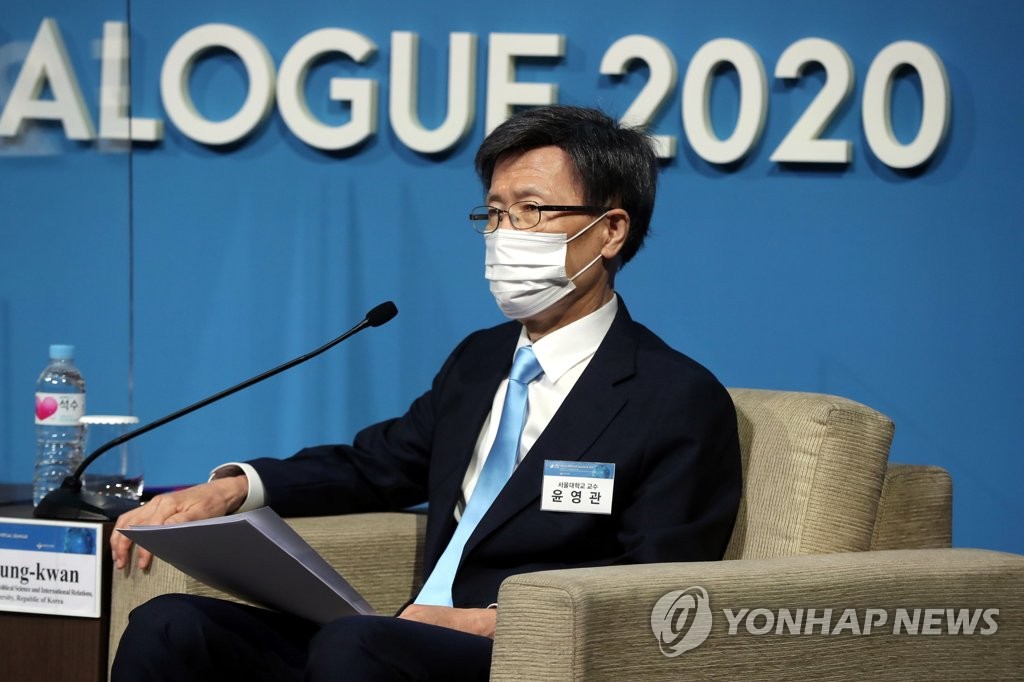 "Of course, one difference is that this time two biggest powers, U.S. and China, are interdependent heavily with each other. But severe competition will go on in all fronts, diplomatic, military, economic and even in the ideological front," he added.

The professor also called attention to multilateral institutions being weakened by the Sino-U.S. rivalry.

"Since these institutions are becoming weaker and weaker, it will be much more difficult for humankind to confront and overcome global common challenges, like pandemics, climate change or cyberthreats," he said.

"And in this kind of situation, it would be very desirable if middle powers can unite with each other and make a coalition and try to maintain the liberal order in international relations," he added.

University of Chicago Professor John Mearsheimer said that the COVID-19 crisis will have "zero effect" on international relations, stressing "what matters for the future" is the rising competition between the U.S. and China.

"I think COVID-19 is obviously a huge problem to the world today, but once COVID-19 goes away, it's not going to have any effect on international politics, just like great influenza in 1918," Mearsheimer said.

Mearsheimer also said that whoever wins the U.S. presidential election, there will be an intense security competition between Washington and Beijing as China is expected to grow more assertive.

Noting the increasingly taut relationship between the major powers, Wang Jisi, president of the Institute of international Strategic Studies at Peking University, said that Beijing sees no reason to cooperate with Washington and that gives North Korea "more breathing space."

"Pyongyang now has more breathing space and time to consolidate its domestic order and it's likely to be more assertive due to the U.S.-Republic of Korea alliance, and it will also try to drive a wedge between Seoul and Washington," he said.

In his congratulatory remarks, Seoul's Defense Minister Jeong Kyeong-doo underscored the need for international efforts to strengthen solidarity in fighting transnational challenges, such as the ongoing pandemic.

"Concerns are arising with regard to a second wave of the virus across the globe. International solidarity and cooperation are thus more important than ever," he said.