SEOUL, Sept. 1 (Yonhap) -- U.S. troops are concentrated in Northeast Asia and should be distributed to better respond to evolving security challenges, including China, a senior Pentagon official has said.

"We are heavily concentrated in Northeast Asia," David Helvey, assistant secretary of defense for Indo-Pacific affairs, said, according to a news report by the U.S. Department of Defense news on Monday.

"We'd like to be able to make our presence more geographically distributed, more operationally resilient," Helvey said. "Maybe, the future is going to be less about bases and more about places -- being able to operate across a multiplicity of locations, which give us the flexibility and the agility to respond to a variety of different threats and challenges."

His comments came when the U.S. has been pushing for greater "strategic flexibility" for its forces deployed around the world amid speculation that it could consider pulling some troops out of South Korea.

Defense Secretary Mark Esper said earlier that he wants to pursue more rotational force deployments into theaters as it give the U.S. greater strategic flexibility in terms of responding to challenges around the globe, though he stressed that he has not issued an order to withdraw forces from the Korean Peninsula.

South Korea's defense ministry also made it clear that any reduction of the U.S. Forces Korea (USFK) has not been discussed between the two sides. Currently, around 28,500 U.S. service members are stationed in South Korea. 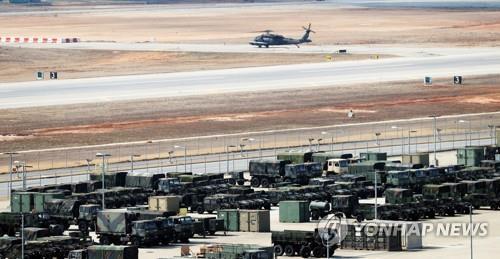 Helvey then said that the flexible presence is to ensure the U.S. is resilient in the face of a variety of threats, including China.

"One of the key things in our strategy is talking about putting the relationship with China on a trajectory of transparency and non-aggression," the official said. "That's going to require a sustained, open channels of communication with the Chinese — the secretary has talked to his Chinese counterpart a number of times already."

The U.S. and China may have issues of common interest where they could work together, such as North Korea and COVID-19.

"There's other areas where we may have opportunities to cooperate based on shared interest, but that's something we have to work in with Chinese to identify," he said.