"This week, in particular, (the government) appeals (to the public) for having patience and joining the fight against COVID-19," he said during a daily inter-agency meeting on efforts to contain the virus spread.

He said this week will be a "crucial watershed to determine the spread or plateau of COVID-19." 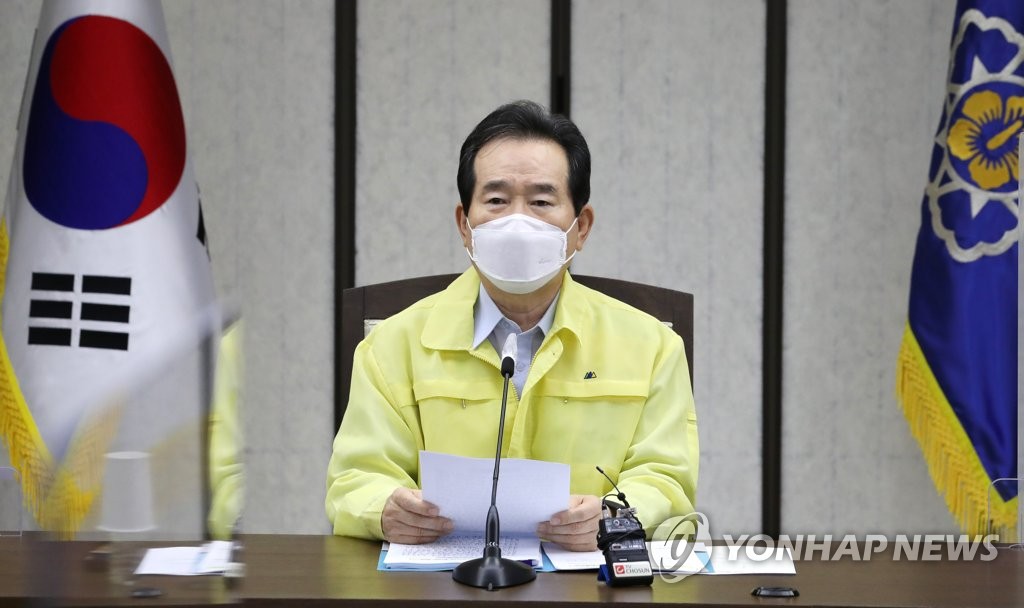 His remarks came as the so-called Level 2.5 social distancing restrictions are in place in Seoul, Gyeonggi Province and Incheon, where around half of the nation's 52-million population reside.

"There are still violations of related regulations at such places as some churches, restaurants and cafes," Chung noted in the session held in Sejong, an administrative town 130 kilometers south of Seoul.

He urged a concerted campaign against the virus so that efforts by many people won't be in vain.

He also expressed concern about the possibility that virus transmissions will gain pace during and after the nation's Chuseok holiday season, which will start at the end of this month. This year, Chuseok, one of Korea's biggest annual celebrations, falls on Oct. 1 and a five-day holiday period begins the day earlier.

Chung emphasized that the Chuseok holiday shouldn't become another trigger for the spread of the virus.

He requested that the people plan for the holidays with a top priority on the antivirus efforts.

Regarding medical doctors' strike in protest at the government's reform drive, he reiterated a call for them to return to work immediately.

It's regrettable that an association of trainee doctors nationwide continues the collective action despite the government's decision to hold off on a push for the expansion of medical school admissions and to postpone the annual national licensing exam for doctors by a week, with no preconditions attached.

"There is little time left," he said. "The later your return is, the bigger the suffering of the patients will be."