WASHINGTON, Sept. 1 (Yonhap) -- U.S. Secretary of State Mike Pompeo said Tuesday that South Korea and other U.S. allies will join U.S. efforts to tackle what he called economic and political aggression from China.

"I think you are seeing the entire world begin to unite around the central understanding that the Chinese Communist Party simply is going to refuse to compete in a fair, reciprocal, transparent way," the top U.S. diplomat said in an interview with U.S. cable network Fox Business News. 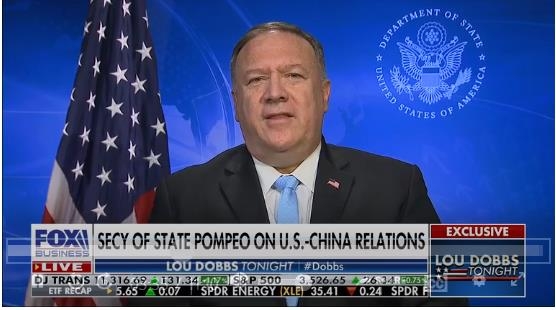 His remark came one day after the United States' No. 2 diplomat, Deputy Secretary of State Stephen Biegun, expressed hope for South Korea and other countries to join the U.S.-led Indo-Pacific Initiative, viewed by many as a new mechanism aimed at countering the growing presence of China in the region and throughout the globe.

"Our strategy is to push back against China in virtually every domain," Biegun said in a webinar held Monday on the sidelines of the annual U.S.-India Strategic Partnership Forum.

"The purpose here can be to create a critical mass around the shared values and interests of those parties in a manner that attracts more countries in the Indo-Pacific and even from around the world," he said.

"The previous administration had refused to confront this challenge. And you've seen us do it in places -- we've done it with respect to telecommunications, Huawei," the secretary of state said, referring to the Chinese telecom giant.

Washington placed an export ban on Huawei in May 2019 and has since been urging its allies to follow suit, citing dangers of information and technology leaks to the Chinese firm.

In July, Washington shut down a Chinese consulate in Houston, alleging it was part of a larger Chinese espionage effort.

On a similar note, the U.S. secretary of state said the U.S. now seeks to shut down all Confucius Institutes in the U.S., arguing that many students and officials there may be collaborating with the Chinese government.

"I hope the answer is zero," Pompeo said when asked how many of 75 or more such institutions here would be left standing by the end of the year.

"I think that everyone's coming to see the risk associated with them and the recruitment of spies and collaborators inside of those institutions. I think these institutions can see that, and I'm hopeful we will get them all closed out before the end of this year," he added.

Pompeo says S. Korea and other allies will unite against China

Pompeo says S. Korea and other allies will unite against China