SEOUL, Sept. 2 (Yonhap) -- North Korea appears to have begun rehearsals for a military parade it is expected to hold next month to mark the 75th party founding anniversary, a U.S. monitoring website said Wednesday, amid speculation Pyongyang could use the event to showcase its new strategic weapons.

Satellite imagery taken on Aug. 31 of the "Mirim airfield" in Pyongyang shows "hundreds of vehicles parked in the northwest parking lots adjacent to the parade grounds, and thousands of troops in formations near or in the area that replicates Kim Il Sung Square," 38 North said in a report posted on its website.

"North Korea has been widely expected to hold a major military parade on October 10 this year to mark the 75th anniversary of the Workers' Party of Korea. These images provide the first evidence that rehearsals are underway," it said.

"The Mirim facility, which is located on the eastern side of Pyongyang, is typically used as a rehearsal location for parades. Compared to previous years, training appears to have started slightly later than usual, possibly due to COVID-19 and anti-pandemic measures or severe weather constraints," it added.

This year's party founding anniversary draws keen attention as leader Kim Jong-un said in his New Year's message that he will soon showcase a "new strategic weapon," expressing frustration with little progress in denuclearization negotiations with the United States.

A Seoul government source said that more than 10,000 troops, along with hundreds of vehicles, are believed to have been mobilized for the rehearsals.

No strategic weapons, such as an inter-continental ballistic missile (ICBM), have been spotted at the scene so far, but the North could bring key items to hangars at the base as the event draws near, he added.

"We are closely monitoring North Korean military movements, including the planned parade. No unusual or provocative moves have been detected," a Joint Chiefs of Staff officer said.

North Korea has refrained from large-scale public events amid its nationwide anti-virus campaign, but signs have been detected that it is preparing to hold a military parade to mark the upcoming anniversary.

In June, South Korea's defense ministry said in a report to lawmakers that the North is making preparations to hold a large-scale military parade, with new buildings spotted under construction at the Mirim airfield in Pyongyang.

Leader Kim visited a typhoon-hit area last week and urged "an all-out campaign" of completing the recovery so that the country can mark the party founding anniversary next month "with proud of achievement." 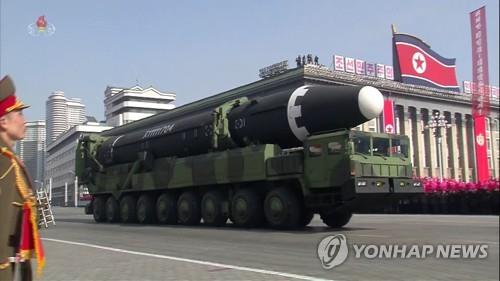