SEOUL, Sept. 2 (Yonhap) -- Dozens of military doctors will be sent to civilian hospitals in Seoul and the metropolitan area to support the government's handling of a growing number of new coronavirus patients in the region, the defense ministry said Wednesday.

Twenty-two military doctors will be assigned to nine hospitals designated to treat COVID-19 patients, including the Incheon Medical Center in the western city of Incheon and the Seobuk City Hospital in Seoul, in phases starting Friday, according to the ministry.

"The central government asked for 53 medical doctors, and we are working on the additional support," the ministry said in a release. 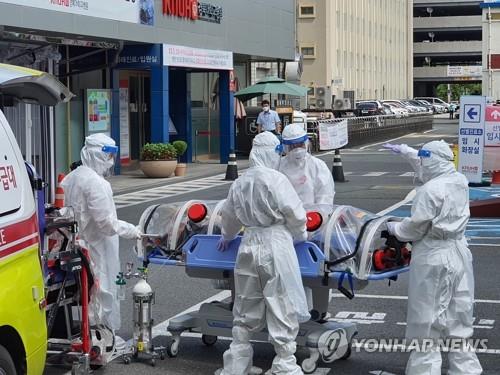 Starting Friday, the Armed Forces General Hospital in Seoul will also begin accepting COVID-19 patients in critical condition, and 68 doctors and nurses are getting ready for the move, the ministry said, adding that discussions are under way with the health authorities to use more beds at the military hospital for new coronavirus patients.

The recent spike in the number of infections in the greater Seoul area has caused concern about the possible shortage of sickbeds particularly for those with serious symptoms.

On Wednesday, South Korea reported 267 additional COVID-19 cases, including 101 patients residing in Seoul. Since mid-August, the country has seen triple-digit rises in the daily number of fresh cases.

Among military members, one more Army soldier tested positive, bringing the total number of infections at the barracks to 109.

The soldier stationed in the southeastern city of Daegu has been in isolation after coming in close contact with an officer who earlier tested positive. The soldier was confirmed to be infected in his second test, which was administered after he showed symptoms.

Currently, 760 service members are in isolation in accordance with the health authorities' guidelines, and the military has quarantined an additional 1,521 people under a stricter antivirus plan of its own as a preventive step, according to the ministry.