SEOUL, Sept. 2 (Yonhap) -- The Seoul office of the U.N. human rights body has called on North Korea to clarify the fate of 316 cases of missing people, including South Korean and Japanese nationals, on the occasion of the International Day of the Disappeared.

The Office of the U.N. High Commissioner for Human Rights (OHCHR) in Seoul made the call in a tweet Sunday, noting 11 passengers and crew members from South Korea who disappeared in the North's 1969 hijacking of a Korean Air flight and 12 Japanese nationals abducted in the 1970s and 80s.

The tweet came as the office marked the special day aimed at increasing public awareness of people who disappeared involuntarily, including those imprisoned or kidnapped at places unknown to their families.

"On the International Day of the Disappeared, let us remember all those who have disappeared in the DPRK. The UN Working Group on Enforced or Involuntary Disappearances has communicated 316 cases to the DPRK requesting information to clarify their fates and whereabouts," the office wrote on Twitter.

"The DPRK must clarify the fate of all cases of disappearances. It should work with the international community to initiate credible investigations to determine the fate and whereabouts of all those disappeared in the DPRK," it added.

"North Korea must respond to families of all those who were abducted throughout years, and immediately end the practice of enforced disappearance of persons in secretive detention camps," he tweeted.

The OHCHR opened its Seoul office in 2015 to monitor the human rights situation in the North and collaborate with concerned governments and civil society to help enhance human rights in the reclusive country. 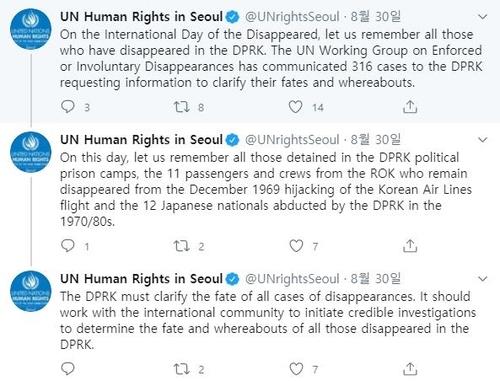