SEOUL, Sept. 2 (Yonhap) -- The long-drawn strike by doctors in protest over the government's medical reform plan has reached a crossroads, as they are in talks with the ruling party to resolve differences, sources said Wednesday.

A group of doctors, represented by the Korean Medical Association's (KMA) chief Choi Dae-zip, met the ruling Democratic Party's policy committee chief Han Jeoung-ae late Tuesday to exchange views on how to end the standoff that comes as the country tries to cope with a resurgence of coronavirus cases.

Han said at the meeting that lawmakers can review all key issues from scratch, proposing to create a special commission to address matters that can improve the quality of the country's medical field.

The lawmaker said the reform plan cannot be changed, though how the plan is implemented can be discussed going forward.

If talks progress, details on how to end the walkout can be ironed out through extensive dialogue between all interested parties, the sources said.

Earlier this week, a task force of the Korean Intern and Resident Association voted in favor of an indefinite walkout by its members.

Thousands of trainee doctors working at general hospitals began the strike on Aug. 21 to protest the government's medical reform scheme. The KMA, with over 130,000 members, has backed the move, with staff and major hospitals also siding with trainee doctors and medical students.

Doctors have steadfastly opposed the reform plan that will expand admission quotas at medical schools by 4,000 over the next 10 years, starting in 2022.

The government, which has so far baulked at scrapping the reform plan, said it will respect the outcome of talks between parliament and doctors. 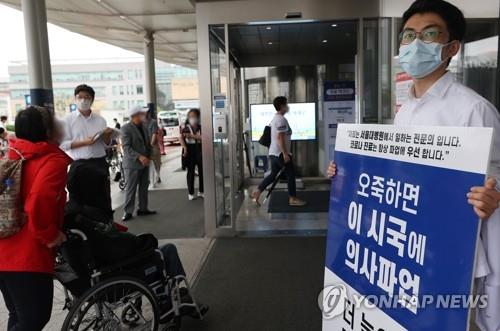 "The government is watching the discussions taking place and wishes for an amicable outcome," said ministry spokesman Son Young-rae, adding that the government will respect any understandings reached.

This marked the fourth day in a row that new coronavirus cases have stayed below 300, but health authorities remain vigilant as untraceable and critically ill patients are still at large.