SEOUL, Sept. 2 (Yonhap) -- The main opposition United Future Party announced on Wednesday that it has decided to rename itself as People Power Party (PPP).

Having been proposed during the party's steering committee meeting earlier this week, the new party moniker was endorsed in a general meeting of party members.

A total of 578 members from across the country voted remotely as a precautionary measure amid the spread of the new coronavirus to approve a revision to the party constitution, including the renaming.

The move came less than seven months after the launch of the UFP through the merger of the Liberty Korea Party and minor conservative parties in mid-February.

The party explained the new name implies "the power coming from the people, exercised for the people and uniting the people into one."

Kim Chong-in, the caretaker leader of the party, vowed efforts to completely revamp the party after its crushing defeat in the April 15 parliamentary elections.

"(The party) had strong negative images as a party falling behind the changes of the era, a party siding with the privileged and a party with divided factions fighting," Kim said during the meeting at the National Assembly.

"But it will now evolve into a party that leads the country into a changing era, communicates with the people, accompanies the weak and leads the unity of the people," he added.

The party registered the new name at the National Election Commission later in the day to make it official.

Officials said the party also plans to change its campaign color from the current pink to another hue and formally announce it two weeks later. 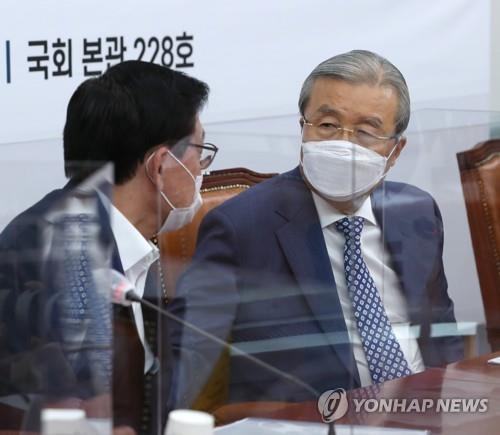