WASHINGTON, Sept. 2 (Yonhap) -- A former White House spokeswoman and unflappably loyal supporter of U.S. President Donald Trump believes it would take a "miracle" to get North Korea to give up its nuclear weapons, a news report said Wednesday, citing a new book from the former aide to Trump set to be released next week.

In her new book, titled "Speaking for Myself," Sarah Sanders describes in length Trump's first summit with North Korean leader Kim Jong-un in Singapore in June 2018, according to the report from British newspaper The Guardian. 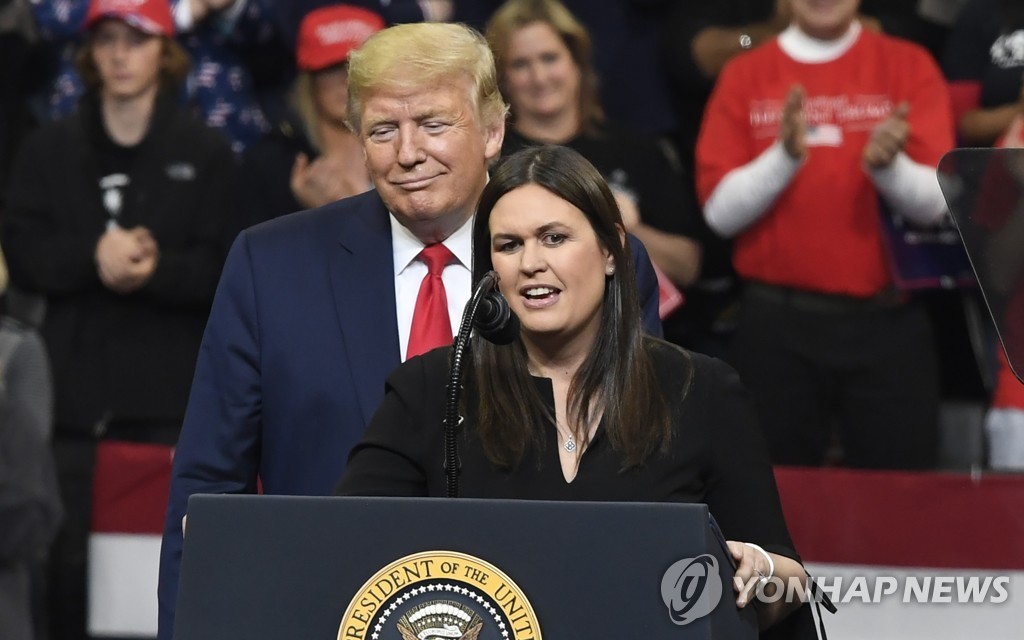 "Of the incident with Kim, whom Trump courted assiduously in the first two years of his presidency, Sanders describes a session at the Singapore talks in which the dictator 'reluctantly' accepted a Tic Tac from Trump, who 'dramatically blew into the air to reassure Kim it was just a breath mint' and not a capsule of poison," the report writes.

Such an incident involving a breath mint was earlier described by Trump's former national security adviser, John Bolton, in his own book, "The Room Where It Happened," released earlier this year.

But unlike Bolton, who has turned sour against the U.S. president, Sanders remains a loyal supporter of Trump, and therefore her view on the prospect of a denuclearized North Korea may be far more damaging to Trump's efforts to win a second-term partly on a notion that he has successfully kept North Korea from additional provocations.

Though their talks have stalled since their second and latest summit, held February 2019, ended without a deal, Trump insists his good relationship with Kim is what has kept the U.S. from going to war with the communist state.

In another possible blow to Trump, Sanders describes how the U.S. president, though jokingly, told her to "take one for the team" when she told him that the North Korean leader may have winked at her during the 2018 Singapore summit.

"Well, Sarah, that settles it. You're going to North Korea and taking one for the team! Your husband and kids will miss you, but you'll be a hero to your country," she quoted Trump as saying, according to the report.