SEOUL, Sept. 3 (Yonhap) -- Toronto Blue Jays' starter Ryu Hyun-jin has survived a series of gaffes by his teammates to collect his third victory of the season.

Ryu held the Miami Marlins to a run on five hits over six gutsy innings at Marlins Park in Miami on Wednesday (local time). He struck out eight to tie his season high and walked two batters, while making a new season-high 99 pitches.

The bullpen took over to begin the seventh inning with the Blue Jays nursing a 2-1 lead, and A.J. Cole, Rafael Dolis and Anthony Bass each threw a scoreless inning to lock down the win by the same score.

It was Ryu's sixth consecutive start with no more than one earned run allowed. He improved to 3-1 and lowered his ERA from 2.92 to 2.72.

The Blue Jays are now 10-7 in one-run games, the most wins in the majors in that situation. 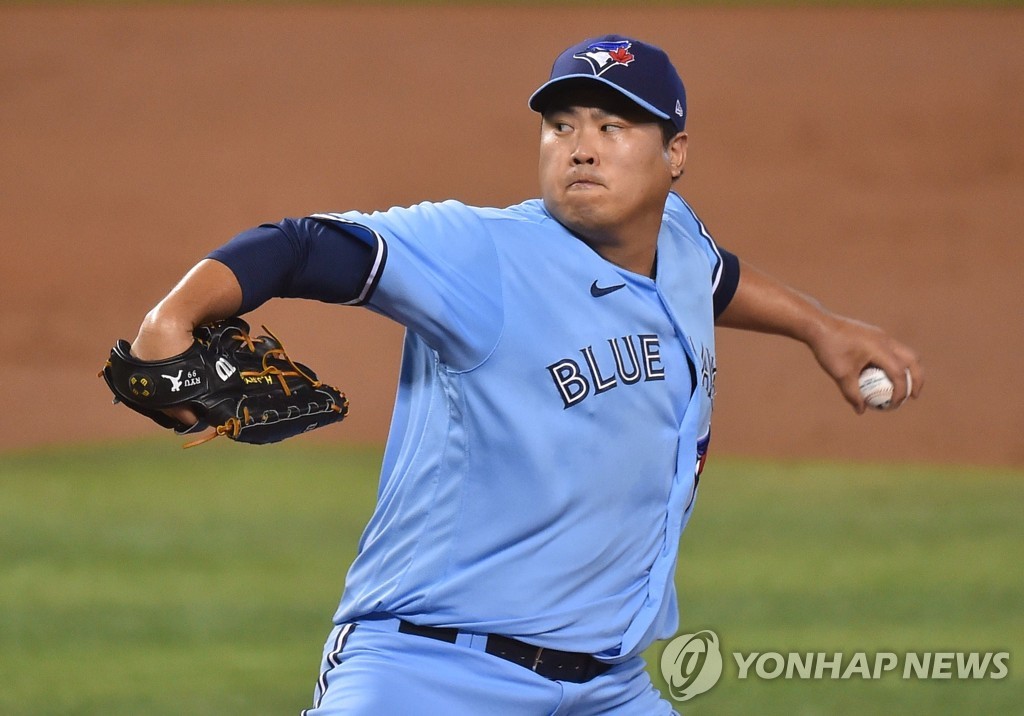 After an uneventful first inning, Ryu didn't get any help from his defense in the second inning. So he took matters into his own hands to keep the Marlins off the board.

Brian Anderson led off the inning with a bloop single that dropped in shallow right field, with neither right fielder Teoscar Hernandez and second baseman Jonathan Villar able to get there in time.

Villar had an adventurous second inning. On the next batter, Villlar fielded a hard groundball moving to his left, but made a wide throw to second in an attempt to start a double play. Shortstop Santiago Espinal was pulled off the bag, and Villar was charged with a throwing error.

Lewis Brinson then hit a groundball that caromed off the mound and bounced toward center field. Villar caught the ball just behind the second base bag and threw out Brinson.

With runners at second and third, Ryu struck out the next two batters -- Jorge Alfaro swinging on a changeup and Jazz Chisholm fanning on a curveball. 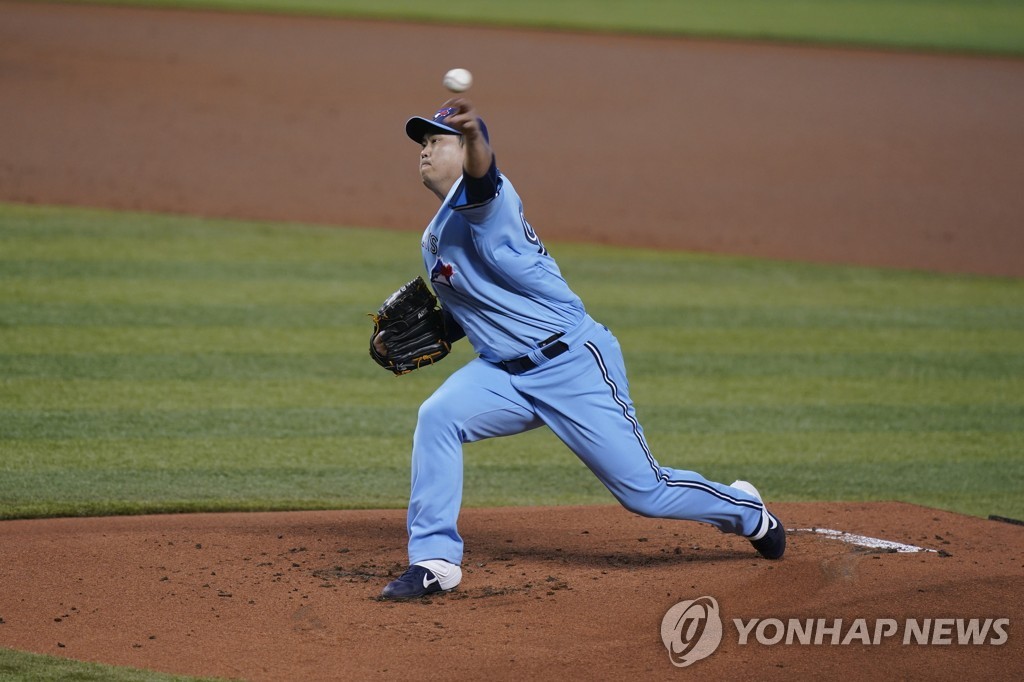 After a leadoff walk to Jesus Aguilar in the fourth, Ryu retired the next three hitters in order to keep it a scoreless game.

The Blue Jays' offense spotted Ryu a 2-0 lead in the top of the fifth, thanks to Lourdes Gurriel Jr.'s two-run homer. It was the team's first homer since last Friday.

It was also his way of atoning for an earlier baserunning miscue. The Blue Jays were sloppy on the base path all game, with Villar in the thick of the mess.

In the first inning, Villar lined a single to left but was thrown out by a mile at second trying to stretch it into a double.

In the top of the second, Gurriel Jr. was picked off at first base when he got a late jump on a pitch in the dirt and was slow to return to the bag.

Villar was picked off at third base with two outs in the top of the fourth, after straying too far off the bag as Teoscar Hernandez took off for second.

Ryu kept the Blue Jays in the game through all this, though he finally cracked with two outs in the bottom fifth.

Ryu struck out Jorge Alfaro after a 10-pitch battle. He retired Chisholm on a flyout but then gave up three straight singles, the last one being Garrett Cooper's RBI single to center that cut the Marlins' deficit to 2-1.

The left-hander threw 89 pitches through five, but he came back out for the sixth inning. Anderson led off with a double to the right-center gap, but the Marlins helped out Ryu, as Corey Dickerson and Brinson flied out and grounded out swinging on the first pitch.

Anderson advanced to third on the Brinson grounder, but Ryu stranded the runner by striking out Alfaro with his 99th pitch of the game.

Ryu allowed just one hit over the first 18 batters he faced but then served up four against the last eight. 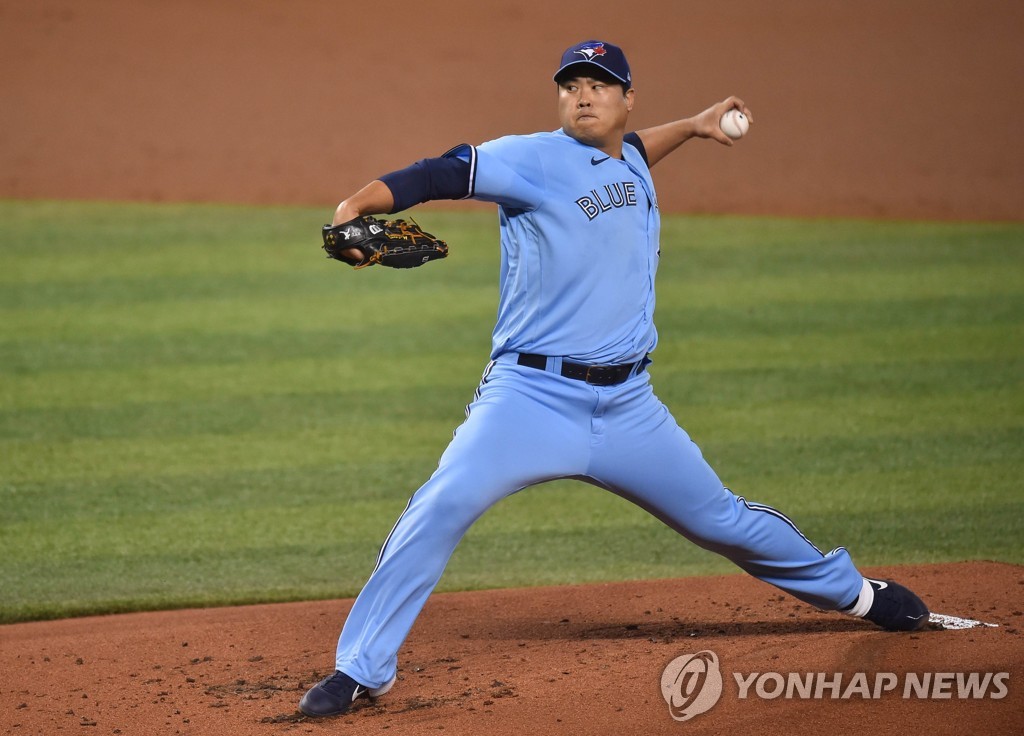