SEOUL, Sept. 3 (Yonhap) -- An Army soldier stationed in the eastern coastal county of Yangyang tested positive for the new coronavirus after coming into contact with an infected colleague, the defense ministry said Thursday.

The soldier has been in isolation after the colleague was confirmed to have COVID-19 following a visit to Seoul for vacation in mid-August. The greater Seoul area has seen a surge in the number of confirmed cases since around that time.

He initially tested negative but received a positive result in his second test conducted Wednesday before exiting quarantine, according to the ministry.

The latest case brought the total number of infections among military members to 110.

Since late last month, the ministry has restricted all service personnel from vacationing and off-installation trips to stem the spread of the virus.

Currently, 734 service members are in isolation in accordance with the health authorities' guidelines, and the military has quarantined an additional 1,938 people under stricter anti-virus schemes of its own as a preventive step.

South Korea reported 195 new COVID-19 cases, including 188 local infections, raising the total caseload to 20,644, according to the Korea Centers for Disease Control and Prevention (KCDC). 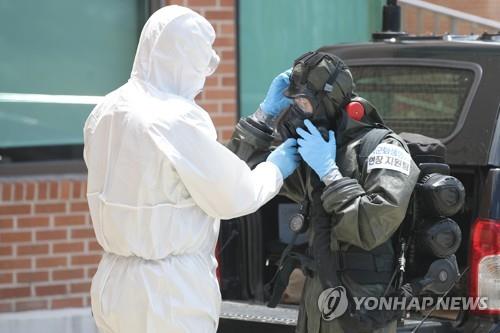