SEOUL, Sept. 3 (Yonhap) -- A task force of doctors began discussions Thursday on whether to adopt a deal reached with the ruling party on ending a strike amid the coronavirus pandemic.

The task force and the ruling Democratic Party were working on the wording for a final agreement that reportedly includes putting on hold the government plan to increase medical school admission quotas unconditionally.

Members of the Korean Medical Association's (KMA) and the Korean Intern and Resident Association (KIRA) held a closed-door meeting. No details were immediately available.

KIRA announced an indefinite walkout of its members earlier this week. 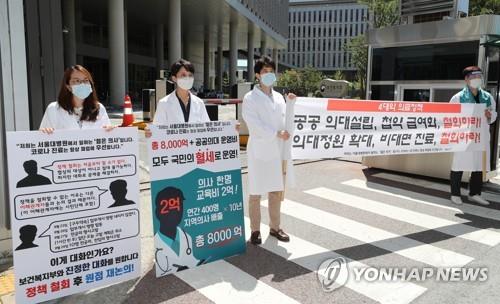 Doctors' strike at critical juncture over talks with ruling party

Doctors' strike at critical juncture over talks with ruling party