SEOUL, Sept. 3 (Yonhap) -- South Korean shares extended gains to a third session Thursday, as major chipmakers rallied amid hopes for a recovery. The Korean won fell against the U.S. dollar. 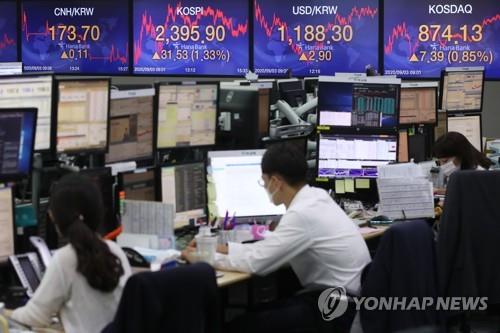 The KOSPI's jump was largely attributed to the advances of chipmaking heavyweights, spurred by a 2.84 percent rally in the Philadelphia Semiconductor Index, a global gauge for the chipmaking sector.

In Seoul, most large caps on the main bourse traded higher.

The local currency was trading at 1,188.3 won against the U.S. dollar, down 2.9 won from the previous session's close.