SEOUL, Sept. 4 (Yonhap) -- The government and the ruling Democratic Party (DP) reached an agreement with an association of medical doctors Friday to end a weekslong strike by trainee doctors.

After the two sides reached the accord overnight, Rep. Han Jeoung-ae, the policy committee chief of the DP, and Choi Dae-zip, the head of the Korean Medical Association, will meet later in the morning to formally sign the five-point agreement, a ruling party official said.

Currently, the ruling party, health ministry officials and the medical side are in the process of fine-tuning the details of the pact, according to officials.

The agreement is expected to bring to an end a large-scale medical walkout that was staged for two weeks in protest against the government's medical reform plan that includes increasing medical school admission quotas and establishing a new public medical school.

The two-week strike has disrupted medical services at general hospitals and other medical centers as the government has struggled to contain the rapid spread of the new coronavirus here. 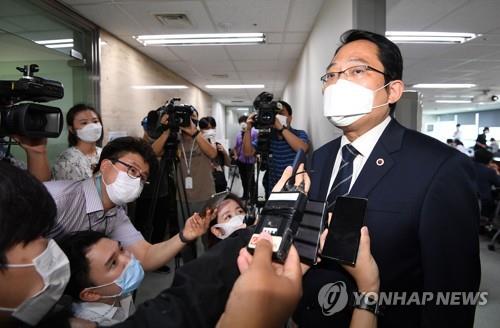