SEOUL, Sept. 4 (Yonhap) -- South Korea's government said Friday that it is seeking a 27.2 trillion won (US$22.8 billion) research and development (R&D) budget for 2021 to secure growth for future generations.

The sum represents a 12.3 percent increase from 24.2 trillion won for 2020 and marks the second year of a double-digit annual rise following the 18 percent hike for 2020, the Ministry of Science and ICT said.

Of the total, roughly half, or 13.2 trillion won, will be injected into the so-called New Deal projects, helping combat infectious diseases, promoting development of industrial materials, components and equipment, as well as supporting bio-health, future mobility and system chips. The government said it will also allocate funding for basic R&D and fostering innovative researchers.

The ministry said it has earmarked 1.1 trillion won for the digital new deal effort covering artificial intelligence 5G mobile connectivity that can contribute to the digitization of the country's social overhead capital. A further 800 billion won will be used in the green new deal efforts centered on renewables. 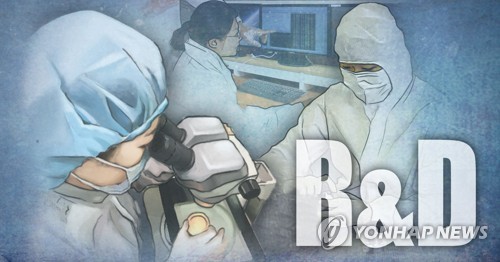 The new year's budget will funnel 200 billion won into responding to infectious illnesses and dealing with outbreaks, with 170 billion won to be spent on finding local treatment drugs and vaccines for COVID-19.

To help boost the materials, components and equipment sectors, the government will provide 2.2 trillion won to better respond to shifts in the global value chain caused by the pandemic and trade disputes. Seoul said it wants to spend 2.3 trillion won on bio-health, future mobility and system chips, which can all enhance the country's competitiveness in critical sectors, while 7.3 trillion won is to be provided for basic R&D and 300 billion won for promising scientists, to help the country stay abreast of the latest advances in science and technology.

The R&D budget that was submitted to the National Assembly on Thursday is set to be approved by lawmakers on Dec. 2. The total size of the country's budget sent to parliament stands at 555.8 trillion won, an increase of 8.5 percent compared to this year.