SEOUL, Sept. 4 (Yonhap) -- Typhoon Haishen, the season's tenth typhoon, was forecast to arrive here early next week, keeping the country on alert following a series of typhoons that suspended flights and damaged facilities in recent weeks.

Haishen was traveling northwest at a speed of 20 kph over waters some 900 kilometers southeast of Okinawa, Japan, at 9 a.m., according to the Korea Meteorological Administration (KMA). Its maximum wind speed was 49 meters per second.

"The typhoon is forecast to move along the rim of the anticyclone in the east and land on South Korea's southern coast on Monday. This is the route with the highest possibility at the moment," the KMA said. 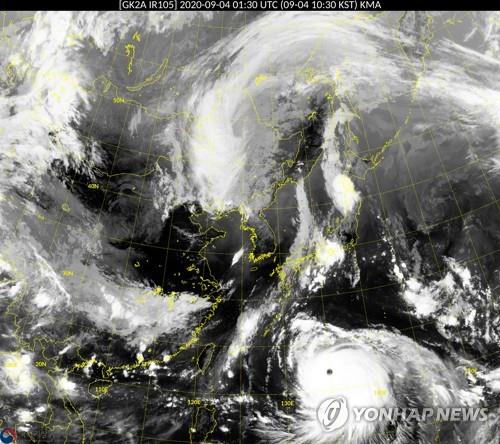 The tropical storm was expected to arrive at waters east of Seogwipo on the country's southern resort island of Jeju on early Monday before moving upper to the southern coast in the afternoon.

The weather agency said Jeju may come under the influence of the typhoon starting Sunday night.

It was forecast to move closest to Seoul, or roughly 80 kilometers away from the capital, at 9 p.m.

The weather agency, however, said the exact route and strength of Haishen may change depending on how it passes through Japan before moving up toward the country. 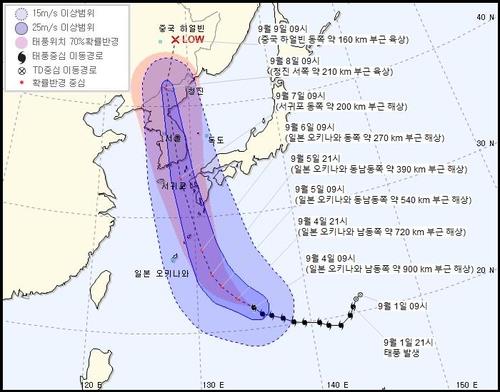 Typhoon Maysak, which hit the country earlier this month, tore through the southern and eastern coastal regions, killing two and causing power outages and flight cancellations. Typhoon Haishen poised to arrive in S. Korea next week

Typhoon Haishen poised to arrive in S. Korea next week