The forecast by the Korea Meteorological Administration (KMA) said that while the central Seoul, Gyeonggi and Chungcheong regions will have clear skies, parts of South Gyeongsang Province in the country's southeast and Jeju Island off the southern coast will receive rainfall early in the morning. It said most of the southern Gyeongsang and Jeolla regions will experience rain in the afternoon.

Gyeongsang is expected to receive 20-60 millimeters of precipitation from Saturday through Sunday, with Jeju and southern regions of Jeolla to get 5-40 mm, the KMA said.

As of 3 a.m. Saturday, Haishen is some 590 kilometers southeast of Okinawa and moving north toward the Korean Peninsula at around 20 kilometers per hour. 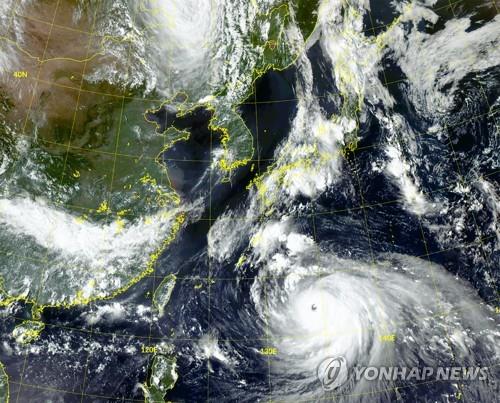 The national weather agency said that temperatures throughout the country will remain under 30 C throughout the day, with daily highs reaching 24-29 C.

The KMA said that the typhoon is likely to start impacting the country over the weekend and could make landfall on South Korea's southern coast sometime around Monday.

The weather agency, however, said the exact route and strength of Haishen may change depending on how it passes through Japan.