SEOUL, Sept. 5 (Yonhap) -- Typhoon Haishen, the season's 10th typhoon that is approaching the Korean Peninsula, may not make landfall here and skirt the country's eastern coast as it heads north, the weather service said Saturday.

The latest forecast, which has the tropical storm veering more east than anticipated, comes as the Korea Meteorological Administration (KMA) earlier warned that Haishen could land on the southern coast and move inland over the country, causing considerable damage.

As of 9 a.m. Saturday, Haishen is some 510 kilometers southeast of Okinawa and moving north at 15 kilometers per hour in the direction of Japan's Kyushu Island, KMA said. At present the typhoon has a central pressure of 920 hectopascals with winds reaching up to 53 meters per second.

It is expected to be 160 kilometers south of the port city of Busan at 9 a.m. Monday.

KMA said that despite the slight change in course, the typhoon is likely to start impacting the country over the weekend, with the southern regions being affected first. 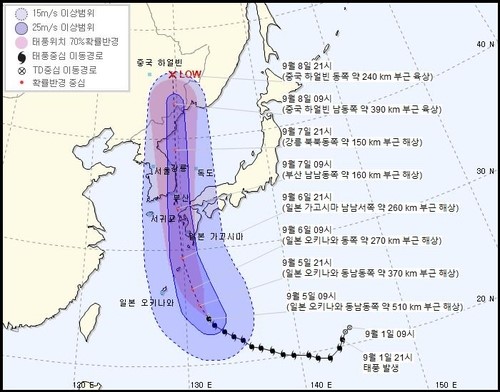 It said that while the central Seoul, Gyeonggi and Chungcheong regions will have clear skies, parts of South Gyeongsang Province in the country's southeast and Jeju Island off the southern coast will receive rainfall early in the morning. It said most of the southern Gyeongsang and Jeolla regions will experience rain in the afternoon.

Gyeongsang is expected to receive 20-60 millimeters of precipitation from Saturday through Sunday, with Jeju and southern regions of Jeolla to get 5-40 mm, KMA said.

The weather agency, however, said the exact route and strength of Haishen may change depending on how it passes through Japan, with a close watch being kept on its direction, especially as it can cause considerable damage if it makes landfall along the southern coast.

A series of typhoons has pounded the country recently with heavy rains and strong winds.