SEOUL, Sept. 6 (Yonhap) -- South Korea raised its typhoon warning to the highest level of "serious" Sunday, as Haishen was marching toward the peninsula amid a forecast that it could directly affect the country with heavy rain and strong winds.

The Central Disaster and Safety Countermeasure Headquarters upped the warning to the top level in the four-tier system at 7 p.m., as the season's 10th typhoon was expected to reach waters close to the southeastern port city of Busan on Monday morning.

In line with the warning, the authorities called for safety measures to protect people, particularly those in low-lying coastal areas, houses near streams and rivers and those vulnerable to landslides.

The authorities also requested that central and provincial governments, public and private companies flexibly adjust time for their employees to begin work to prevent possible damage during their commute.

As of 9 p.m. Sunday, Haishen was travelling northward at a speed of 31 kilometers per hour over waters about 120 km west-southwest of Japan's Kagoshima prefecture, the Korea Meteorological Administration (KMA) said. 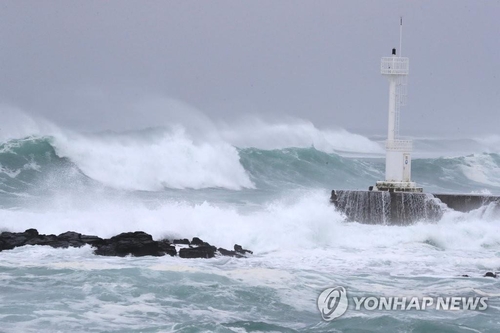 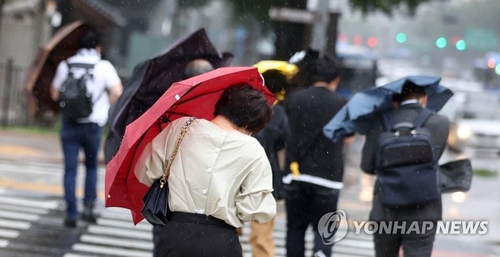 The state weather agency said the typhoon is likely to reach an area about 270 km east of Seogwipo City on the southern resort island of Jeju at 3 a.m. Monday and waters 70 km northeast of Busan at 9 a.m.

It is expected to reach waters about 70 km east-northeast of Gangneung in Gangwon Province at 3 p.m. on Monday and an area about 110 km south-southwest of Chongjin in North Korea at 9 p.m.

President Moon Jae-in instructed the government and provincial authorities to thoroughly prepare to prevent damage from the typhoon.

"The safety of citizens must be prioritized," Moon was quoted by his spokesman, Kang Min-seok, as saying.

The president called for preventive measures, such as restricting access to coastal areas and underground roads, to avoid damage to people, particularly in regions that were battered by the previous typhoon, Maysak.

"There should not be any loophole in safety checks in industrial grounds, including port facilities, and in our measures to move ships to safe areas," he said.

With the approach of the typhoon, the Korea Railroad Corp. suspended or adjusted Monday's high-speed train services for some southeastern regions.

The typhoon also affected passenger plane operations, as 17 flights to and from Jeju were canceled on Monday.