The pope also said he's "continuously praying for the gift from God" of peace and prosperity for the South Korean people in the message recently delivered by Alfred Xuereb, the Holy See's representative in Seoul, according to Cheong Wa Dae spokesman Kang Min-seok. 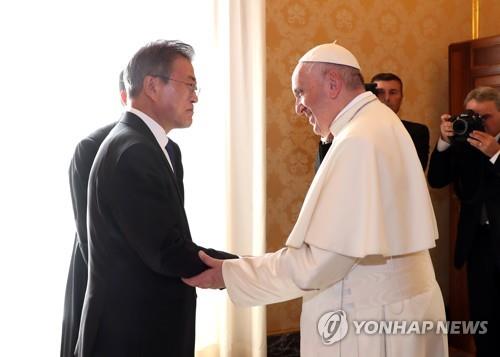 The Holy Father said he "cherishes" dialogue he had with Moon during his visit to the Vatican on Oct. 18, 2018, hoping that the South Korean government will strive incessantly to achieve peace and reconciliation with North Korea.

Moon appreciated the message of warm blessing for the Korean people and reaffirmed his administration's commitment to efforts for the establishment of peace on the peninsula under any circumstances, Kang said.

Xuereb returned from a trip to the Vatican recently.