Unification Minister Lee In-young made the remarks in his online speech for the Korea Global Forum for Peace, an annual forum organized by his office, stressing that he will push for cooperation with the North in public health and other areas beneficial to the two Koreas.

"The South and the North will find the possibility of living together in a single community again through mutually beneficial cooperation," Lee told the forum livestreamed through YouTube. "I believe that would accelerate progress in the peace process on the Korean Peninsula and a big trend of dialogue on denuclearization between the North and the U.S."

Lee said that he will seek exchanges in the humanitarian sector as part of efforts to resume cross-border exchanges and expressed hope for "concrete" cooperation in such areas as public health, the anti-virus campaign and climate change.

"We should open the era of complete, verifiable and irreversible peace, with the two Koreas taking the lead in cooperation with the international community," Lee said. "We hope that the North will respond to this new start." 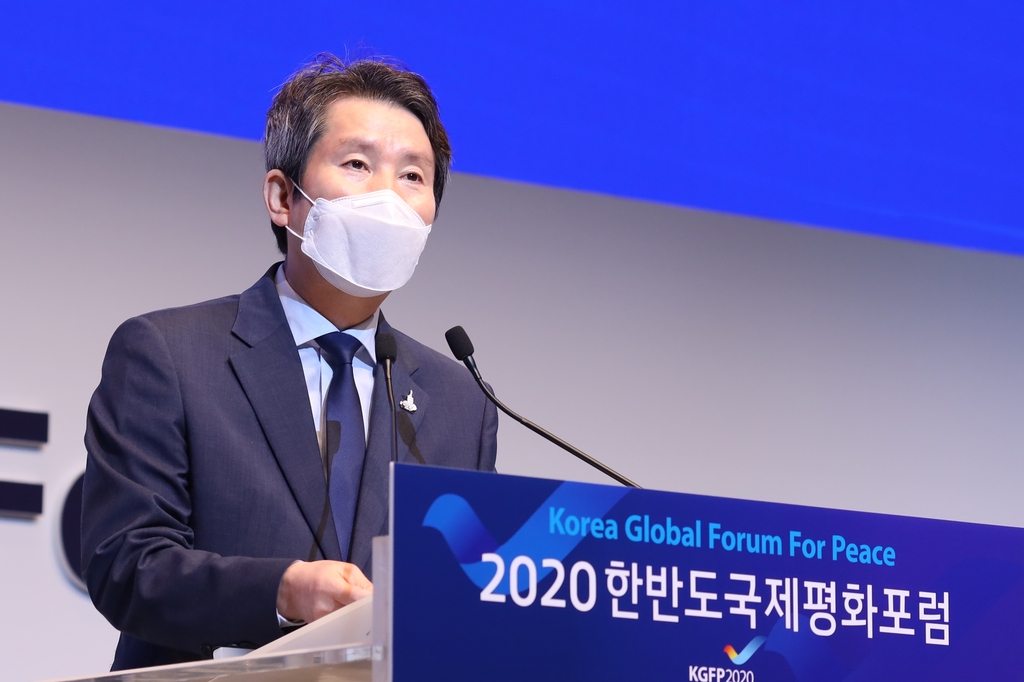 Lee said that the coronavirus pandemic is making it harder for the two Koreas to find solutions to the current impasse in inter-Korean ties and stressed that they should not hope for luck without doing anything.

"A future for the two Koreas cannot be opened just by anticipating a change and leaving things to circumstances," Lee said, recalling the peace process that began with the North's participation in South Korea's PyeongChang Winter Olympics in early 2018.

The 2018 PyeongChang Winter Olympics helped thaw long-frozen cross-border ties, as the North sent its athletes and cheerleaders to the sports event. That led to inter-Korean summits and the historic first-ever meeting between the leaders of the U.S. and the North, though the peace process later reached an impasse.

Inter-Korean relations have also been stalled since the summit between North Korean leader Kim Jong-un and U.S. President Donald Trump ended without a deal in February last year.

Seoul has sought active cross-border exchanges in a way to create a reconciliatory mood and help kick-start the stalemated nuclear negotiations, but Pyongyang has not responded to Seoul's repeated offers for talks and cooperation.

The relations between the two Koreas chilled further recently after the North blew up a joint liaison office in its border town of Kaesong and cut off cross-border communication in protest of the sending of anti-Pyongyang leaflets by activists in the South.

Since his inauguration in July, the unification minister has said that his top priority is to resume severed dialogue with the North and vowed to push for "small-scale" exchanges in a way that does not violate global sanctions.