SEOUL, Sept. 7 (Yonhap) -- U.N. Secretary-General Antonio Guterres said Monday that diplomacy is the "only pathway" to sustainable peace and denuclearization on the Korean Peninsula, urging the two Koreas and the United States to restart diplomatic efforts and resume their stalled dialogue.

Guterres made the appeal in an online message delivered through YouTube for the Korean Global Forum for Peace, an annual forum organized by Seoul's unification ministry, expressing support for South and North Korea to seek cross-border cooperation in combating infectious diseases and natural disasters.

"In 2018, leaders of the Democratic People's Republic of Korea, the Republic of Korea, and the United States showed that dialogue is possible and that diplomacy is the only pathway to sustainable peace and denuclearization," he said, using the North's official name.

"It is important for the parties to continue what they started. The international community is eager to see progress," he added. 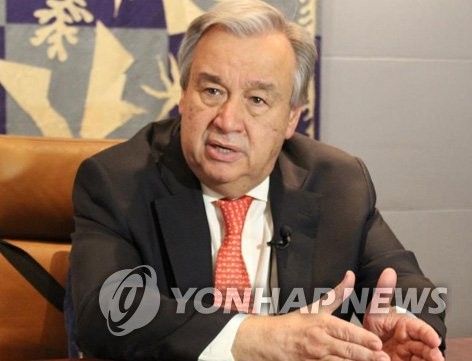 Nuclear talks have come to a standstill since the summit between North Korean leader Kim Jong-un and U.S. President Donald Trump ended without a deal early last year, as they failed to find common ground over how to match Pyongyang's denuclearization steps and Washington's sanctions relief and other concessions.

Guterres also expressed his support for South Korea's push for inter-Korean cooperation in public health and other areas that could affect the people of the two Koreas.

Seoul has sought to resume dialogue between the two Koreas through such exchanges amid chilled relations after the North blew up a joint liaison office in its border town of Kaesong in June in protest of the sending of anti-Pyongyang leaflets from the South.

"You have our solidarity as the Korean Peninsula faces the pandemic, floods and typhoons. It is crucial that the two Koreas address these and other challenges together," he said. "I encourage you, through this important forum, to imagine a future of peace and prosperity on the Korean Peninsula."

U.N. chief says diplomacy is 'only pathway' to sustainable peace and denuclearization

U.N. chief says diplomacy is 'only pathway' to sustainable peace and denuclearization