Interns and residents at major general hospitals in Seoul, such as Seoul Asan Medical Center and Seoul Samsung Medical Center, returned to hospitals as of 7 a.m., and other young doctors are also set to return later in the day.

However, some trainee doctors at general hospitals in other parts of the country have continued their collective action, calling for further measures to protect medical students who will not take a state medical licensing exam set to be held later in the day. 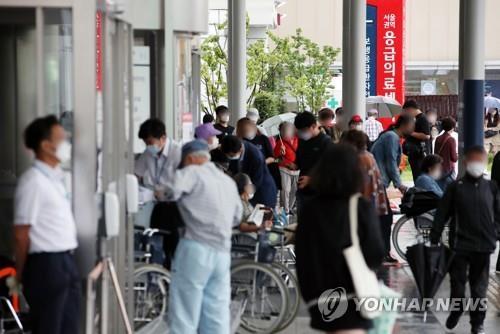 Friday's deal raised hopes for the normalization of hospital operations amid the COVID-19 pandemic, but it angered the junior doctors, who said their views were not properly reflected in it.

The government earlier said it will hold the exam as scheduled after most medical students said they will not take it in protest over the agreement. A total of 446 out of 3,172 exam applicants, or 14 percent, will take the exam, according to the ministry.

Some trainee doctors return to work, yet conflict remains over protecting medical students

Some trainee doctors return to work, yet conflict remains over protecting medical students