SEOUL, Sept. 8 (Yonhap) -- Every autumn, Gu Mi-hoi gathers with her siblings and their families at her mother's house to celebrate the Chuseok fall harvest holiday. They cook delicacies like "jeon" -- meat, fish and vegetables dipped in flour and egg and fried -- and enjoy traditional games like "yut nori" while munching on half-moon shaped "songpyeon" rice cakes.

But for the first time ever, the Gu family has decided to call it off and celebrate one of the country's biggest national holidays at their homes, respectively.

"It's a joyous event where more than 20 people spanning four generations gather to enjoy homemade food and relax. But this year we thought it won't hurt to be extra careful," said the 60-year-old Seoul resident on Tuesday.

"We all try to be careful and follow the social distancing guidelines, but it's a bit scary that there's a lot of untraceable cases, and who knows whether I may also be spreading the virus," she said. 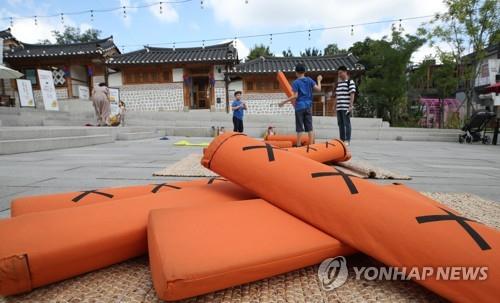 Gu is not the only one planning to spend the major holiday, where millions travel to their hometowns or take short trips, low key.

Members of online communities of moms have shared anecdotes of how their families decided not to gather this year, especially considering that the people traveling to their hometowns are mostly those living in greater Seoul, where virus cases are still spiking in three-digit figures.

With the holiday, which will run from Sept. 30 to Oct. 4 this year, just three weeks away, the government is also striving to encourage people to spend the holiday with close family members at home.

"We request that citizens minimize traveling and, if possible, stay at home and relax at least during the upcoming holiday," Prime Minister Chung Sye-kyun said Monday. "The government will push ahead with measures that will (help) lower density on public transportation."

As part of the measure, the national rail operator is selling only half of the 2 million train seats available during the five-day holiday. Only window seats will be available for purchase, while the tickets will be sold online only to prevent people from waiting in long lines for hours at train stations.

"Considering the grave situation of the new coronavirus, we had to only sell window seats for passengers to enjoy a safe holiday. Please understand even if family members have to sit apart," an official at Korea Railroad Corp. said. 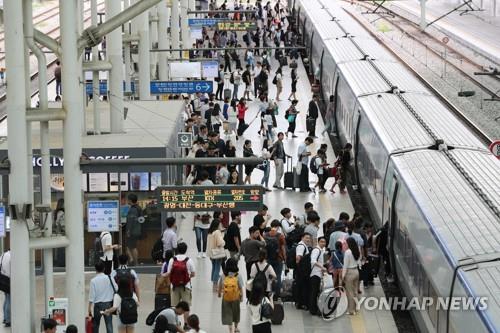 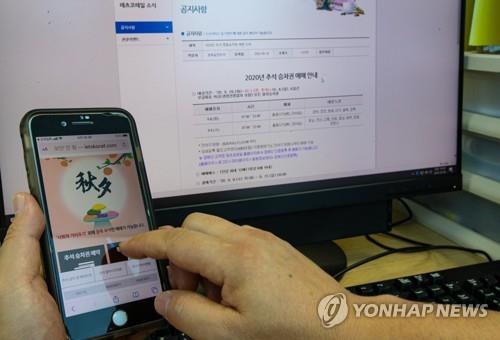 The government has deducted highway toll fees during the Chuseok holiday since 2017, but it is considering temporarily scrapping the plan this year to minimize traffic.

Some cemeteries and memorial venues, meanwhile, are planning to restrict entry or limit the number of visitors to prevent crowds forming for "charye," a traditional ritual of giving thanks to ancestors.

Some local governments, like Boseong County in South Jeolla Province, are preparing an online joint "charye," so that people living in urban areas can take part in the tradition without visiting. Wando, also in South Jeolla, is offering grass cutting services at ancestral graves at a discounted price.

The government plans to run a reservation system at indoor memorial venues for the two-week period before and after Chuseok, and offer an online service for people to thank their ancestors without visiting graves 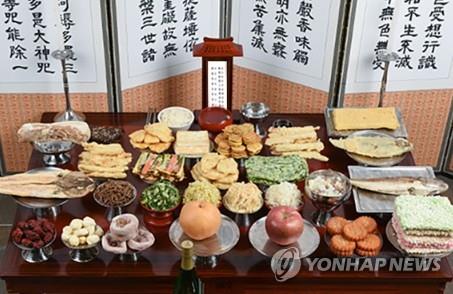 But this is a far-fetched plan for some others who are torn between not visiting their hometowns and complying with pressure from older generation family members who are pushing ahead with the annual reunion.

At online forums, some are even calling for the government to impose Level Three social distancing measures, the toughest in the three-tier system, so that all visits can be ultimately banned.

The government, however, has made clear it will rely on voluntary action rather than enforcing safety guidelines.

"The legal grounds are unclear, and limiting traveling was not even on the table when the (government) was drawing up social distancing guidelines," Sohn Young-rae, a senior health official, said Monday.