According to the survey of 2,000 adults nationwide conducted from Aug. 25-28 by Seoul National University's Graduate School of Public Health, 47.5 percent counted anxiety as the strongest sentiment felt from news related to COVID-19.

The anxiety level marked a fall of 15.2 percentage points from a similar poll carried out in early August, the school noted. 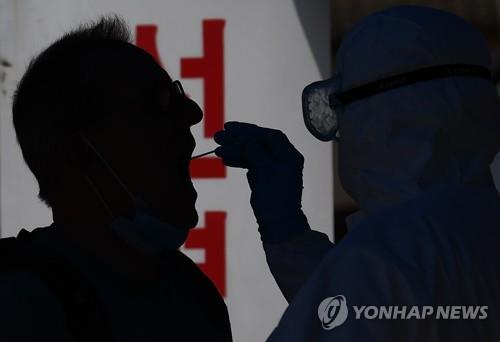 By contrast, the percentage of respondents who said they feel anger due to the renewed spread of the coronavirus more than doubled from 11.5 percent to 25.3 percent.

Those who complained of a sentiment of fear about the pandemic also increased 2.81 times from 5.4 percent to 15.2 percent.

Asked to give reasons for feeling anger, the pollees cited "collective selfishness," "Aug. 15 rallies" and "complacent countermeasures by the government."

People who complained about the sentiment of fear said they are unnerved by the increased number of COVID-19 patients and economic instability.

As many as 83.7 percent of the pollees said Korean society is on the threshold of a crisis due to the COVID-19 pandemic, compared with a corresponding ratio of 39.6 percent in May.

In a multiple answer question on the biggest concern related to the coronavirus, 59 percent cited negative effects on health, trailed by economic slump (41.3 percent) and viral transmission to others (33.8 percent).

Over 40 percent said they have lost jobs or suffered pay cuts due to the coronavirus.

"With the coronavirus crisis lasting for more than seven months, almost all of the people have experienced limitations and deprivation of their daily freedom," a Seoul National University professor involved in the survey said.

"As scholars warn that an accumulation of those experiences can lead to mental health problems, there should be practical psychological quarantine measures," the professor said.