(ATTN: ADDS response from the ruling party in last 2 paras)

SEOUL, Sept. 8 (Yonhap) -- The floor leader of the main opposition People Power Party (PPP) accused President Moon Jae-in on Tuesday of not communicating with the public and "isolating himself" within the walls of Cheong Wa Dae.

"The president should honestly respond to what people are curious about, as well as the affairs that grieve them rather than just telling his side of the story via meetings of the Cabinet and top presidential officials," Rep. Joo Ho-young said in his speech to a plenary session of the National Assembly.

The parliamentary speech was part of a ceremony to mark the opening of the new regular National Assembly session, which kicked off on Sept. 1 for a 100-day run.

The main opposition floor leader's call comes as there has been growing discontent with the administration over issues ranging from increasing real estate prices to allegations of influence-peddling involving Justice Minister Choo Mi-ae.

Choo's son, a 27-year-old surnamed Seo, is suspected of getting an extra four vacation days without prior approval thanks to the influence of his mother, who was then the chairwoman of the ruling Democratic Party (DP), during his military service in 2017. While public suspicions have grown over the issue, as well as Choo's ongoing row with the prosecution chief, Cheong Wa Dae has largely remained mum.

Seizing on the power abuse allegations involving the justice minister, the PPP floor leader also claimed that Choo needs to allow an independent probe into the case and if she cannot do so, she must resign from the seat.

The floor leader also lashed out at the country's souring fiscal health under the Moon administration, demanding that the government come up with a clear answer to how to pay back the country's increasing debts.

"If the current pace continues, the Moon administration, at the end of its five-year term, will hand over more than 410 trillion won (US$234 billion) of additional national debt to the next government," Joo claimed.

"The government should promptly adopt a fiscal standard to stringently restrict the growth rate of national debt," he prodded. 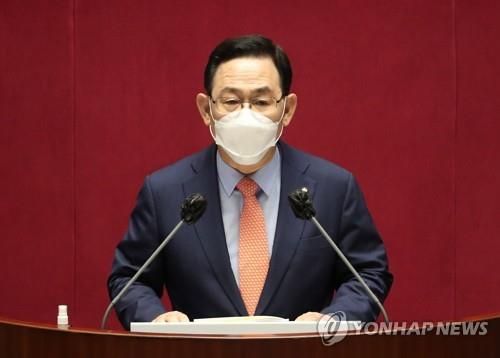 The floor leader also suggested that the government officially allow the domestic use of the locally-manufactured COVID-19 self-diagnosis kit so that "the entire South Korean population could be tested for the virus within a month or two."

As for the government's controversial medical reform plan, which was suspended in the wake of a large-scale medical strike last week, the PPP floor leader proposed forming a consultative body involving the ruling and main opposition parties as well as the government and the medical industry to enhance the country's medical services.

The leader also voiced the party's clear opposition to the government's push to launch a watchdog dedicated to the real estate market as well as the recent hike in the real estate ownership tax, vowing efforts to reverse the tax increase.

"It is regrettable that his speech was consistently critical, but we will not stop seeking cooperative politics," DP spokesman Shin Young-dae said.

He added that the opposition party should focus more on policies, not "political strife," and that both parties should "form a consultative body as soon as possible" to regularly discuss various issues. 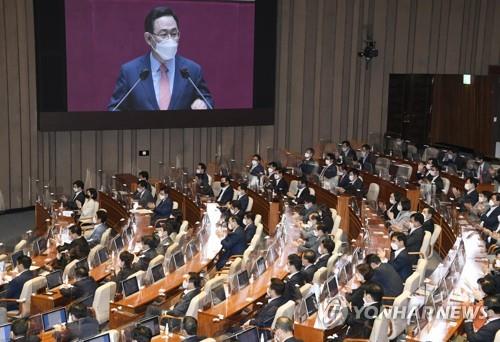