Kang delivered a speech on Seoul's response to the "challenging global context," its handling of the new coronavirus and the erosion of multilateralism, as a special speaker for a gathering of Romanian diplomats via video links.

"We are firmly committed to safeguarding and strengthening our security alliance with the U.S., which has served as a cornerstone of peace and security on the Korean Peninsula, and in Northeast Asia," Kang said.

"But we are also committed to further developing substantial ties in our strategic partnership with China. The growing U.S.-China competition and dwindling space for problem-solving dialogue between them makes this a very tough task," she added. 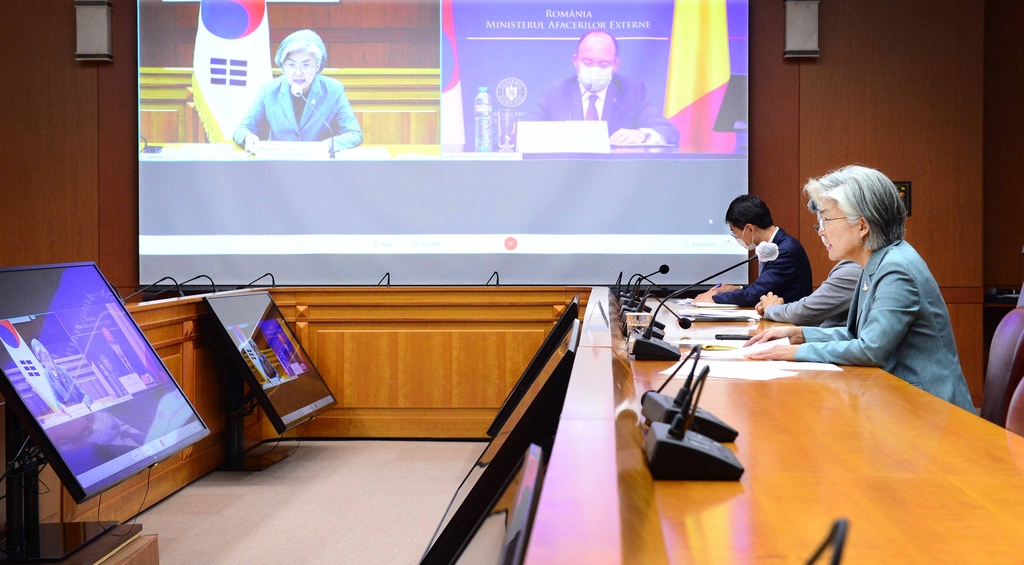 Kang's remarks came as Seoul is striving to map out a coherent strategy to steer clear of the rising tensions between the great powers, promote cooperation between them and enhance its national interests.

In the face of the great-power rivalry, the minister pointed out that "much leverage lies in our geopolitical position and growing capacities."

"And we are endeavoring to solidify the areas of shared interests with the United States, China and other neighboring countries," she said.

While noting the elements that threaten multilateralism, Kang said "what concerns foreign policy actors the most" is the rising tensions between the major powers, and that the downward spiral in their relations has been "destabilizing" for the international community.

Kang also reiterated Seoul's "firm" commitment to shoring up multilateralism, stressing that her government is "realistic and clear-eyed" in its thinking of the future of multilateralism.

"COVID-19 has exacerbated the divisive trends that undermine multilateral cooperation. But it has also made clear how interdependent and vulnerable we are and the urgency of multilateral action to overcome it and prepare for the next global health crisis," she said.

Touching on the lackluster peace efforts with North Korea, Kang stressed Seoul's "unshaken" belief that peaceful engagement with Pyongyang is "the only way forward."

"The road ahead looks arduous in this effort to get North Korea to completely denuclearize, replace the seven decades old armistice with a formal peace treaty and build a prosperous future for all Koreans, especially when the dialogue is stalled as it currently is," she said. "But we are staying the course."