The meeting was held Tuesday to discuss "the severe damage done to the Komdok area of South Hamgyong Province" by Typhoon Maysak, according to the Korean Central News Agency. The east coast region is home to zinc, magnesite and other mines.

The KCNA said that "more than 2,000 dwelling houses and tens of public buildings were destroyed or inundated" in the area, while 60,000 meters of roads and 59 bridges collapsed, over 3,500 meters of railway roadbeds and more than 1,130 meters of rails were swept away.

"The Supreme Leader said that due to the unexpected damage by typhoon we are faced with the situation in which we cannot help but change the direction of our struggle after comprehensively considering the year-end tasks that were under way with the nation-wide efforts," the KCNA said.

Kim did not specify what the tasks were, but they apparently referred to his five-year economic development plan. In a party meeting held last month, Kim acknowledged a failure in achieving intended goals of the plan due to tough internal and external challenges, saying a new scheme will be unveiled in January during a rare party congress.

Kim said that restoration of the Komdok area is important not only for the protection of people and state property but also because it is "an urgent task that should be given top priority for reviving the important arteries of the national economy," according to the KCNA. 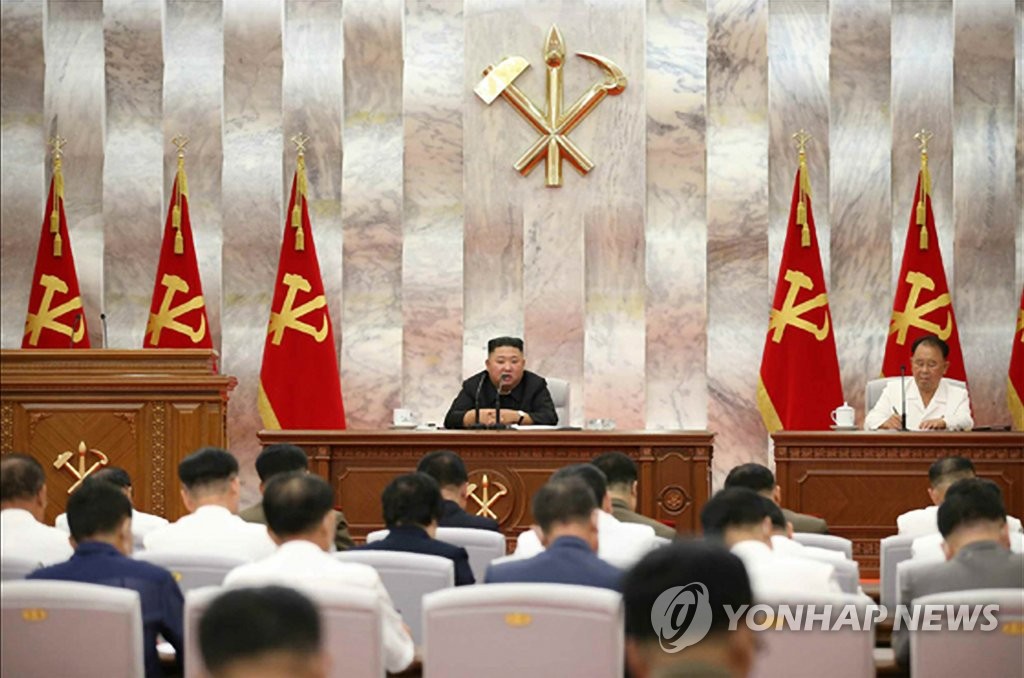 Kim ordered that damaged homes and railways be rebuilt by Oct. 10, the 75th party founding anniversary, and other affected facilities completely restored by the end of this year.

Maysak came as the North was scrambling to recover from a previous storm and heavy downpours that hit its western and eastern provinces in recent weeks. Typhoon Haishen, the 10th tropical storm of the season, hit its eastern region again this week.

On Saturday, leader Kim visited typhoon-hit areas in the country's eastern province and presided over a party meeting at the scene to discuss recovery efforts, state media earlier reported.

The newly formed divisions of elite party members left for typhoon-hit areas on Tuesday, along with trucks and trains loaded with construction tools and other supplies, the KCNA said.

Leader Kim has held a series of party meetings in recent weeks to discuss restoration of typhoon-caused damage. Observers say that such meetings and his trip to the affected areas last week appear to be intended to highlight his image as a leader caring for the livelihoods of ordinary people.