SEOUL, Sept. 9 (Yonhap) -- Foreign Minister Kang Kyung-wha was set to take part in a series of annual meetings led by the Association of Southeast Asian Nations (ASEAN) starting Wednesday to discuss regional security and other issues amid growing U.S.-China tensions.

This year's meetings, running through Saturday, come at a time when the intensifying rivalry between Washington and Beijing poses a diplomatic challenge to South Korea and other nations, especially with the emphatic calls from the U.S. to join its China-bashing campaign.

The gatherings will be held via videoconferencing due to the COVID-19 pandemic.

On Wednesday, Kang will attend an ASEAN Plus Three meeting that brings together the 10 ASEAN member nations and its three dialogue partners -- South Korea, China and Japan.

She will also participate in a South Korea-ASEAN foreign ministers' meeting, followed by an East Asia Summit session to be joined by 18 countries, including the United States, Russia and India.

During the sessions, Kang is expected to highlight the need for restoring multilateralism through strengthening international solidarity, as has been proven vital in the global battle against the coronavirus, her office said.

She will address other key regional issues, such as ensuring maritime security in the South China Sea.

On Saturday, she will take part in the ASEAN Regional Forum (ARF), the biggest annual security conference in the Asia-Pacific region that brings together the top diplomats from 27 countries, including North Korea.

Kang is expected to use the ARF to send out a united message urging Pyongyang to return to the negotiating table to break the impasse in the denuclearization talks, while calling for continued international support for the peace process on the Korean Peninsula.

The Vietnamese government confirmed earlier that North Korean Foreign Minister Ri Son-gwon will not be attending the sessions and the North's top diplomat in Hanoi will be present instead. 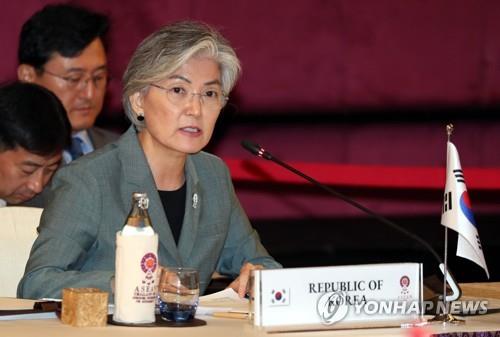