(ATTN: UPDATES story throughout with outcomes of ASEAN Plus Three, S. Korea-ASEAN meetings)
By Kim Seung-yeon

SEOUL, Sept. 9 (Yonhap) -- Foreign Minister Kang Kyung-wha highlighted the need Wednesday to strengthen multilateral cooperation among countries in South and Northeast Asia as a way to overcome a major health crisis like the coronavirus pandemic.

She made the call during an annual Association of Southeast Asian Nations (ASEAN) Plus Three meeting that brought together the 10 ASEAN member nations and its three dialogue partners -- South Korea, China and Japan.

"Minister Kang noted that the ASEAN and Plus Three has effectively operated a multilateral cooperation regime at times of crises like the Asia financial crisis and SARS, and stressed the need for cooperation based on such past experiences when dealing with COVID-19 as well," her office said in a press release.

It was the first session in the series of ASEAN-related meetings slated to take place this week via videoconference due to the COVID-19 outbreak. She subsequently took part in a South Korea-ASEAN foreign ministers' meeting that followed. In the ASEAN Plus Three session, Kang expressed expectations that the meeting would help pool together ways to strengthen the region's resilience by continuing that cooperation and solidarity based on a firm multilateral system.

Pointing out that transparent disclosure of information is essential in boosting health cooperation, she introduced Seoul's push for establishing a new health dialogue channel with ASEAN partners.

As for a swift economic recovery from the virus impact, Kang called for efforts to ease entry restrictions currently being imposed over virus fears for essential travelers like businesspeople so as to help trade and investment.

Kang also asked for continued support for Seoul's unwavering commitment to the peace process on the Korean Peninsula, renewing the call for a swift resumption of the denuclearization talks between the U.S. and the two Koreas.

In the subsequent foreign ministers' meeting with ASEAN partners, Kang made similar remarks about the importance of restoring multilateralism amid the COVID-19 pandemic, with a focus on enhancing cooperation in digital economy.

The participating countries noted that South Korea has been increasing its contribution in the expansion of digital infrastructure, like smart cities, in ASEAN.

Kang used the meeting to introduce Seoul's efforts to reflect the change in demand for cooperation from the ASEAN region, saying that through such efforts the partnership with ASEAN members can be further strengthened under the government's signature New Southern Policy.

During the online meeting, the top diplomat also asked for ASEAN members' support for South Korean Trade Minister Yoo Myung-hee's campaign for the director-generalship of the World Trade Organization.

Following the two sessions, Kang was to attend an East Asia Summit session, joined by 18 countries, including the United States, Russia and India.

On Saturday, she will take part in the ASEAN Regional Forum (ARF), the biggest annual security conference in the Asia-Pacific region that brings together the top diplomats from 27 countries, including North Korea.

Vietnam, the host for this year's ASEAN gatherings, has confirmed that North Korean Foreign Minister Ri Son-gwon will not be attending the sessions, but its top diplomat in Hanoi will be present instead. 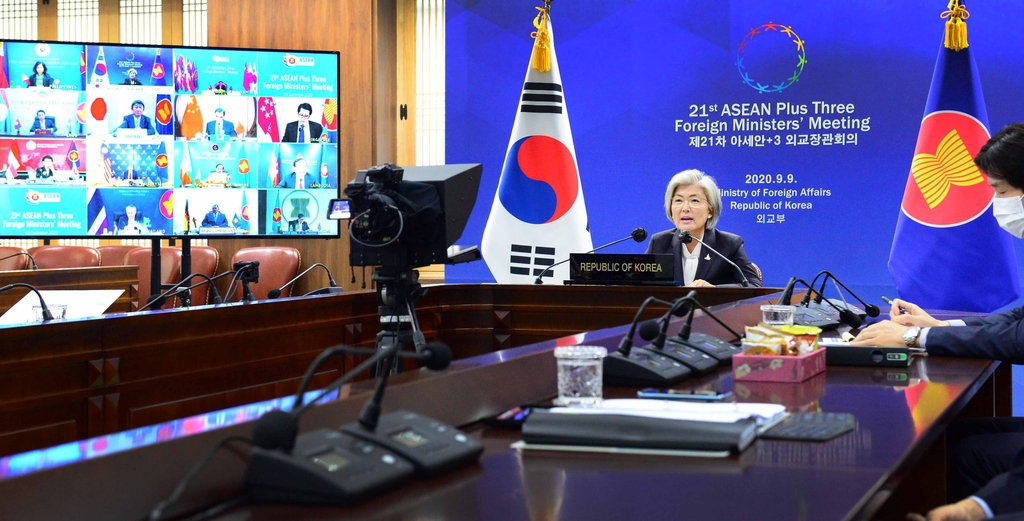 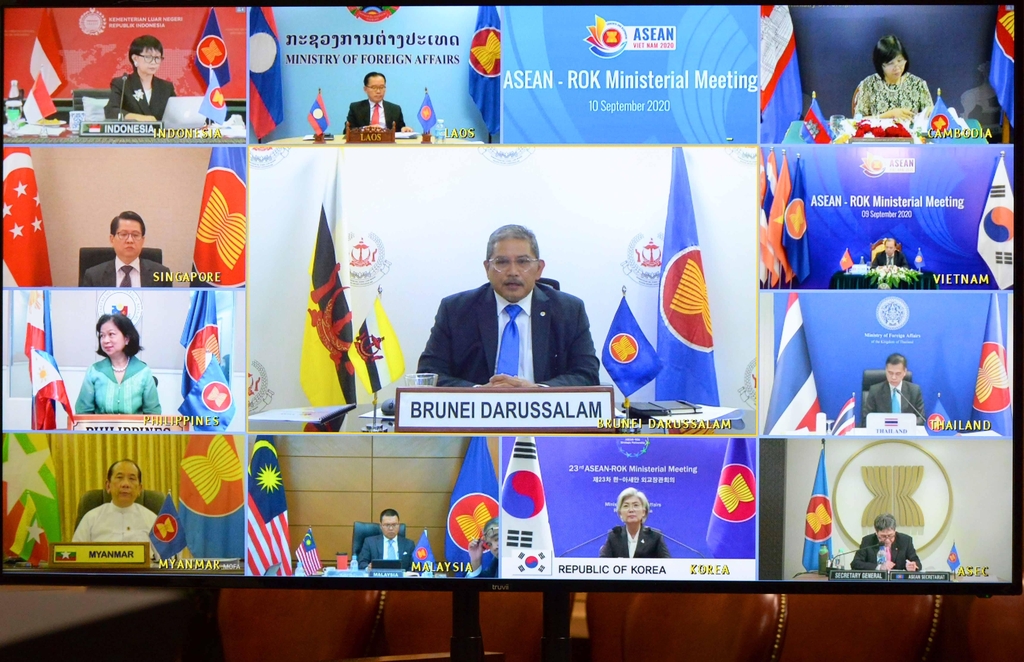