Domestic investors bought a net US$1.56 trillion won worth of Tesla shares between July 1 and Tuesday, according to the data from the Korea Securities Depository.

Their net buying peaked at $761 million in July before declining to $471 million in August and rising again to $489 million this month. 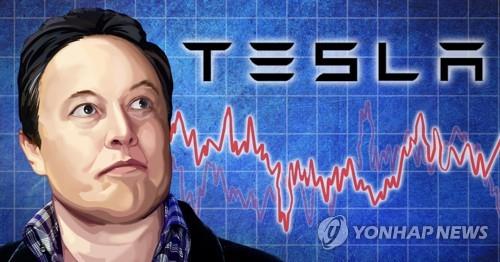 Tesla conducted a 5-for-1 stock split last month and trading began at the adjusted price on Aug. 31. Tesla closed at $418.32 on Friday.

With demand for Tesla remaining brisk, the global EV leader was the most-bought foreign company among local investors, with their holdings reaching $3.88 billion as of Tuesday.

But there are growing concerns over local investors' losses from their exposure to Tesla due to the sharp drop in its share prices.

Smartphone giant Apple Inc. was the second-most-bought stock by South Korean investors with $773 million, followed by graphic card maker Nvidia with $509 million and Amazon with $452 million.

Turnover of overseas stock transactions came to $42.3 billion over the cited period, more than the full-year amount of $40.98 billion for 2019. The value of U.S. stock trading accounted for nearly 87 percent of the total.

South Korean investors' net buying of overseas stocks stood at $5.87 billion during the period, according to the data.
(END)