"Some groups are planning to stage large-scale rallies on National Foundation Day, which falls during the Chuseok holiday season, and this is very deplorable," Chung said during a government COVID-19 response meeting. "I want to ask them if they care about the lives and safety of the people at all."

The prime minister instructed the police and regional governments to sternly respond to any illegal acts that interfere with the government's quarantine operations.

"The government will unhesitatingly exercise its authority granted by the public against any acts that obstruct quarantine and pose threats to the safety of the community," Chung said.

The National Foundation Day rallies on Oct. 3, envisioned by right-wing civic groups critical of the Moon Jae-in administration, could pose a major challenge as quarantine authorities are scrambling to bring the recent flare-up in COVID-19 cases under control.

Another set of massive protest rallies in central Seoul on the Aug. 15 Liberation Day has been a source of mass infections, leading up to the recent flare-up, with more than 500 people having tested positive for the virus in relation with the rallies.

Among the groups that joined the Aug. 15 rallies was Sarang Jeil Church, the Protestant church in northern Seoul led by pastor Jun Kwang-hoon. More than 1,000 church members, including those who attended the rallies, have been infected with the virus.

The prime minister also called for extra precaution against the spread of the virus during the five-day Chuseok autumn harvest holiday between Sept. 30 and Oct. 4. 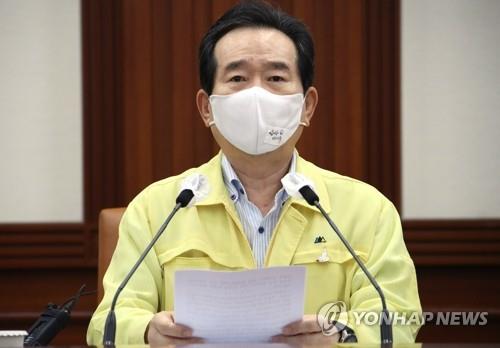