SEOUL, Sept. 9 (Yonhap) -- As hockey career paths go, the one Sam Kim took to reach the heights he once thought impossible has been truly one of a kind.

Kim, born to Korean parents in Flushing, New York, was announced as the new video and coaching coordinator for the Toronto Maple Leafs in the National Hockey League (NHL) on Sept. 1. For the past two seasons, Kim had been the video coordinator for the Bakersfield Condors, the Edmonton Oilers' affiliate in the American Hockey League (AHL), where he was responsible for helping the coaching staff with video breakdown and analysis. 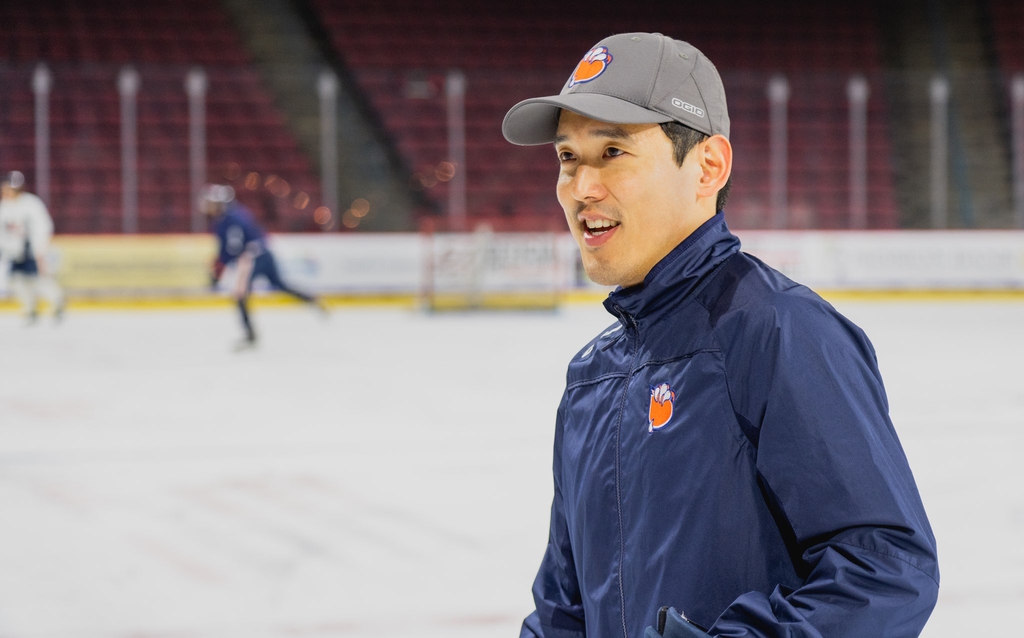 A jump from the AHL to the NHL seems ordinary enough. But there were plenty of other stops in between, including one as a mascot for an NHL team and another as a video coach for the South Korean men's national team at the 2018 Winter Olympics. Kim has tried to make sure he would take something from every job he had.

Along the way, Kim became a resounding answer to cynics who question the merits of the time-honored value of hard work.

"I was lucky to have had some people who helped me to connect with others, but for me, the most important thing is to work hard," Kim told Yonhap News Agency in a phone interview on Sunday. "People don't really want to help you out if you don't work hard."

Kim, 35, fell in love with hockey as a kid growing up in New York. But as much as he wanted to get to the NHL, Kim eventually realized he wasn't good enough to do so as a player.

"I knew I really loved hockey, and I wanted to work in hockey," Kim said. "I didn't know I could actually get to the NHL. I didn't know it was even possible." 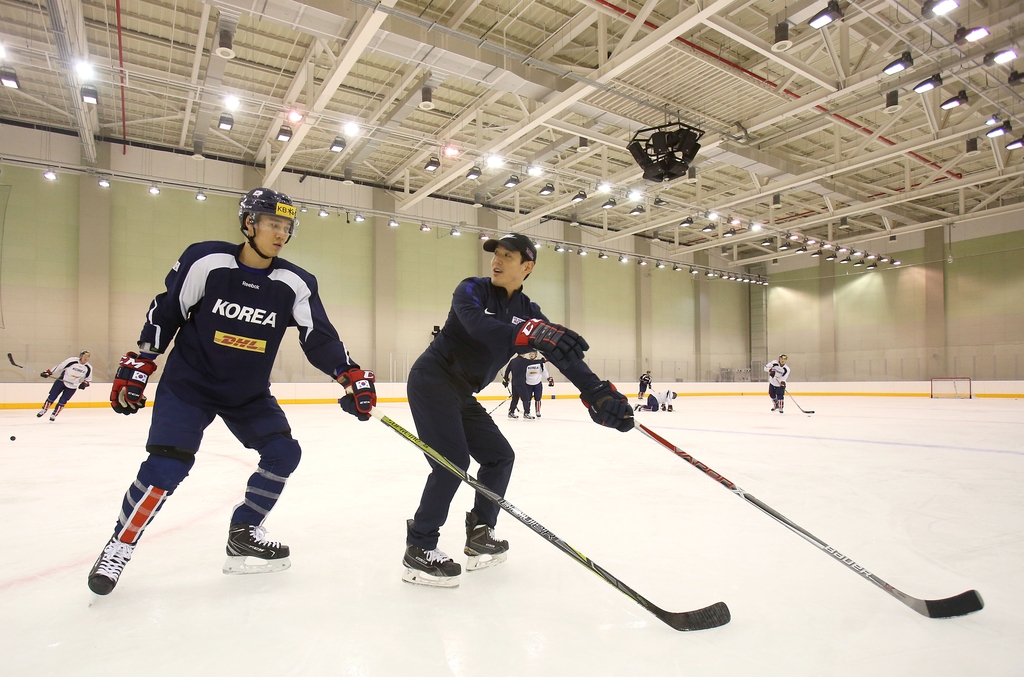 After earning his economics degree at Boston College and doing some video work for the school's hockey team, Kim did end up in the NHL in 2007 -- as an intern with the New York Islanders. The following year, Kim became the Islanders' mascot, Sparky the Dragon, surviving kicks, punches and tackles from unruly members of the crowd.

And in an impressive juggling act from 2009 to 2011, Kim also coached Columbia University's club team and served as a skating coach for his alma mater, Syosset High School. He found another job as director of hockey at World Ice Arena in Flushing, managing the hockey school and coaching clinics from 2010 to 2012.

Kim went to graduate school in the fall of 2012 and earned a master's degree in sport management from the University of Massachusetts Amherst.

He then found himself working with an NCAA Division I program at the American International College, first as video coordinator and later as director of hockey operations. The stint in Springfield, Massachusetts, lasted from 2012 to 2014.

Kim spent one season as an assistant coach for the Springfield Pics of the United States Premier Hockey League, a junior circuit, and it was on to the AHL in 2015 -- as video and statistics coordinator for the Springfield Falcons, the Arizona Coyotes' affiliate.

The Falcons didn't make the playoffs that year, and Kim was staring at a long offseason. And that's when the South Korean men's national team came calling, with head coach Jim Paek asking Kim if he could come work during the world championships in Poland in April 2016.

Kim had been in touch with Paek a few years earlier for a networking project for his master's degree, but they only met for the first time in Poland.

"I did some video over there, and he talked afterward about having me move to Korea," Kim said of the time when he officially became the video coach for Paek.

As a young hockey player, Kim had admired Paek, the Seoul-born, Toronto-raised former NHL defenseman. Paek is the first Korean native to play in the NHL and also to have his name on the Stanley Cup, having captured back-to-back titles with the Pittsburgh Penguins in 1991 and 1992.

"It was a privilege to work with him. I miss Jim a lot," Kim said. "I learned a lot from my time with the national team. If the opportunity (to coach in South Korea) came again, I know I'd be very excited about that."

Specifically, Kim said Jim challenged members of his staff to speak up and think for themselves, rather than just follow the lead of the bench boss.

"Something that I really appreciated about Jim is that he's a players' coach, and he treats the coaching staff the same way," Kim said. "He doesn't say, 'My way is the only way.' I think he likes to listen to everyone's opinions. It helped me grow up a lot and it made me more confident about what I believed. 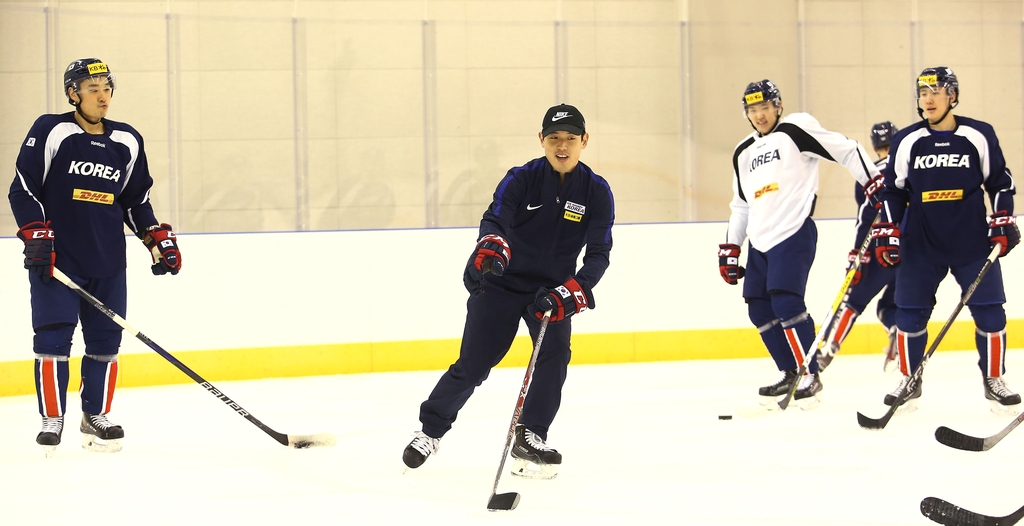 "I knew things Jim wanted to see (in videos)," Kim continued. "He would always ask me first what I saw and what I thought. And I would always tell him, and then we would watch the video together. He was able to lead but not control us. I think that really helped me throughout my career."

Paek recalled sitting in his office with Kim and talking shop with him at tournaments, "just feeding off each other and brainstorming (about) what we can do better." The head coach also said even though Kim never played in the NHL, he "always did his homework and he understood the game."

"He did such a fine job of knowing exactly what I wanted and what the players wanted," Paek told Yonhap News Agency on Monday. "He had a special gift there. He really took advantage of that and helped me a tremendous amount, and helped this national team to be where it is today."

After two more years back in the AHL, Kim has finally landed his first NHL coaching gig with the Leafs. Paek said Kim will be surrounded by "really good people" on the Leafs' staff who have been in Kim's shoes before as underdogs, and added he has no doubt Kim will be a quick study at the highest level of the sport.

"Sam has worked for a lot of demanding people. I expected a certain caliber and he delivered that," Paek said. "He's used to the workload and he's self-motivated. He knows what he has to do and what he thinks will make the team better and what the coaches want. He's a pretty smart guy. He can bring all that technology and problem-solving (skills), and make the coaching staff very efficient and not waste time."

Specifics of Kim's responsibilities are yet to be determined, since the Leafs are still trying to fill out the rest of the staff under head coach Sheldon Keefe. After taking over the bench from Mike Babcock in November during the 2019-2020 campaign, Keefe finished the season with two assistants hired during Babcock's tenure, Dave Hakstol and Paul McFarland. McFarland has since left to become head coach and general manager of the Kingston Frontenacs in the Ontario Hockey League. Last month, the Leafs also decided not to renew the contract of their video coach Andrew Brewer, opening up the position for Kim.

"In general terms, I'll be watching a lot of video and making sure coaches have all the videos that they need," Kim said. "They have different opinions and philosophies on what's important." 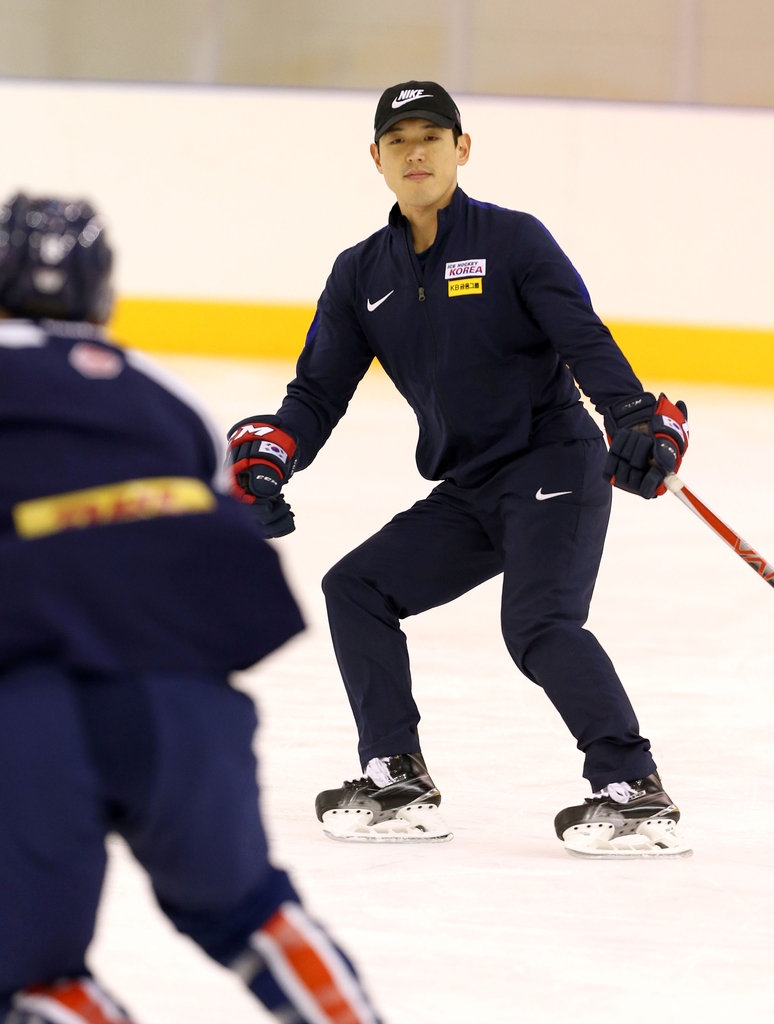 The Leafs are one of the Original Six teams in the NHL -- the Boston Bruins, the Chicago Blackhawks, the Detroit Red Wings, the Montreal Canadiens and the New York Rangers are the others -- and they have won 13 Stanley Cups, second only to 24 by the Canadiens. Kim said it was "a huge privilege and an honor" to be a part of such a historic team.

Toronto is a hockey-crazed city that prides itself on being the center of the hockey universe. With such passion comes great expectations, especially since the Leafs haven't lifted a Stanley Cup since 1967 and haven't even won a playoff series since 2004.

The Leafs have a young, talented core of forwards, led by No.1 center Auston Matthews and playmaking winger Mitch Marner. Their window to contend and end the title drought is open now, and Kim admitted that "it's hard to ignore" the kind of pressure that the Leafs face.

But the key for him is to stick to the same mantra that has taken him to Toronto.

"If I try to think about how I could get to the NHL, it'd have been too overwhelming and the NHL seemed so far away," he said. "The most important thing is to do the best job I can every day. Everything will take care of itself. I know how important (winning the Stanley Cup) is for people in Toronto. The best way to handle it is to focus on doing the best job every day."

Kim also said he wants to be known for more than just his diligence.

"The thing I take the most pride in is that people remember me as just a really good person," he said. "Doing a good job is part of it. Whenever people hear my name, I want them to remember me as a good person."